This was a different kind of Memorial Day for our family. Our recorded history of participation in services goes back to right after the Civil War when communities all across the nation were still trying to adjust to the shocking death toll brought on by the late war. Unlike the wars that followed, there were no instant reports of most individual casualties, only telegraphed reports about large groups of dead, wounded and missing. For four years, in places with strange sounding names, men on both sides of the conflict fell victim to mechanized war on a scale never before seen on this continent.

When the guns fell silent, the grieving process began. Graves were decorated in loving memory in both the North and the South as families adjusted to their new realities. The conflict wasn’t the end of war, it was just a brutal reminder of what wars cost. 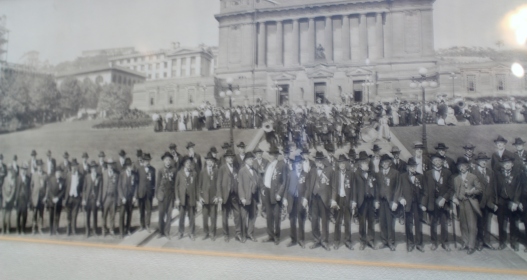 The Grand Army of the Republic (GAR) was the veteran’s organization that carried the banner of remembrance in the northern states. While they were no longer on active duty, the posts were ruled by General Orders and had men of rank and responsibility. My Great Grandfather John Culbert McPherson was such a man. A private in the Union Army, he carried the traditions of the proudly all the way up until his death (and apparently a little beyond). He is listed in the Memorial Day 1927 Bulletin as the Acting Adjutant (even though he had passed away five months earlier in January 1927).

Great Grandfather was a first generation American. His family had come from Northern Ireland and he was the first of the children born in America. His love for this country were probably the inspiration for both of his sons serving in the Army and Navy during World War 1, a grandson in the Navy during World War 2, two more great grandsons serving as sailors from the Vietnam Conflict to the end of the Cold War and most recently a great great grandson serving as a submariner during the Global War on Terror.

Memorial Day is in our blood. From the time you are old enough to put on a Cub Scout or Brownie uniform, you are taught the lessons of this important day. I can’t tell you when my first one was but I can tell you where it was. Mt. Vernon Cemetery in Elizabeth Township near McKeesport Pennsylvania. This is the place where John Culbert McPherson’s remains are interred just a few hundred feet from the Soldiers and Sailors Memorial. Many of my other deceased relatives are there as well and I can remember as a kid rushing with my bundle of flags trying to be the first one to their graves.

I am sure they were there earlier but that is the first of a series of bulletins I have from the many services that occurred over the last 91 years. My brothers and sister played roles many times as kids along with the Boy Scouts of Mt. Vernon and the Girl Scouts too. There was always music, speeches (that always seemed too long) and prayers. In the early years, we also liked the firing squad. If you were a quick and clever boy or girl, you would be able to gather up the brass after each volley. I still have a few empties from those days.

Somehow along the way, the service changed and eventually moved. My Dad was the Commander of the American Legion nonstop for over twenty five years and he saw the dwindling crowds. The Vietnam conflict created so much hostility to all things military and some years the service was just barely kept alive. But Dad persevered and saw his best chance to revitalize it in nearby Elizabeth. He was relentless and enlisted the help of any and all who he could convince or cajole. He boldly approached Admirals and Generals about coming to our small town knowing that in those days they would bring resources. Resources like staff, troops and sailors, equipment and boats.

In another time, I will publish the stories of the longest running Memorial Day in the Mon Valley. But not this year. This year was a bit different. This year was actually pretty painful. But it has a happy ending at least.

When I returned home to the area a few years ago, I dove head first into the VFW and Legion activities. Because of my military and civilian careers, we have lived many places around the world. Coming home was a chance to pay back the community that I had grown up in many years before. I love helping vets and children and I saw a great big hole. Both the VFW and American Legion posts are collocated (have been for years) and it seemed like there was some room for growth. While the Memorial Day program that my Dad created was going along as before, no new things were happening. Like many posts, without new members, they die. So I helped to bring back a number of programs including Speech and Writing Contests at both the VFW and Legion. These contests awarded scholarships and have been around for years but no one was doing anything to work with the local schools. So we raised funds, held the contests and got the schools back on board.

After rising in the “ranks” of the VFW for three years, I helped on a number of other programs and even obtained a grant from a large company to help modernize the post building. This is when I found out about small group politics. One of the older members began to lobby to use the grant money in ways it was not designed to be used for. Since I was the person who signed for the grant and was responsible for the audit to come, I knew that there could be a problem in the future.

So I pushed back hard. At the end of the mess, I was forced out by people who in retrospect must have been pretending to be old family friends. At one point in the conversation, I pointed out my forty years of membership in veterans’ organizations and was told that I hadn’t done it here so it didn’t count. I was also told very bluntly that I just didn’t know how things were done here so I should resign.

I think they were surprised that the “new kid” turned the grant money back into the big corporation. I will not be forced or coerced to do anything unethical. I have higher powers to answer to than small town political hacks. A little disclaimer: There are many great men and women in the Posts who have served well and faithfully over the years. The decisions of the leadership should not be a reflection on them and I wish them all well in the future.

Back to Memorial Day. What do you do when the place where your father worked so hard to grow suddenly rejects you?

First, you remember that there was a first Memorial Day. Then you remember the struggles during the years when the public just didn’t want to be involved. Then you remember that it is about honoring those who gave everything so that we could live in freedom. So my family joined me graveside this morning of one of the best men I ever knew. We erected one of his old “trophy flags” and held a small quiet service that meant more to me than any in recent history. We walked from grave to grave where our family lays and we honored the tragic loss of so many others.

It felt clean and good. I think a new seed was planted today. All things considered, it might have been just about the right time for that. A very special thank you to my family for helping to honor the sacrifices of those brave men and women. I think it was one of the best services we ever had.