Home is the place where, when you have to go there, they have to take you in. (Robert Frost)

Can there be any better feeling than coming home after a journey?

It’s always exciting for me to travel around the world and in the past forty two years I have been blessed to see many places. I keep a journal of sorts and record each place I have visited or traveled through on my way to somewhere else. The journal is actually an old Atlas that my brother gave me a long time ago and in it you will find written the names of cities and destinations that I have been blessed to see. As of last count, there are over 700 places written in the book which includes all fifty states and a pretty good representation of the world’s go to places.

I have flown in everything from a Boeing 707 to the newest Airbus jumbo jet. In my earlier days, I got to ride in a web sling seat on a C130, the C5 Cargo plane and just about everything with wings the Air Force had. My favorite ride was in a Navy COD off of number two catapult on the USS Nimitz near the coast of San Diego.

At the end of each trip though, I am always glad to reach American soil again. This feeling goes back a long ways. Forty years ago this month was one of the first times. I think that flight set the standard for the hundreds of trips that I have taken since then.

In the fall of ’73 before I left for my first run, my Grandparents came to Hawaii to see me. Grandpa Bob (whom I was named for) was always a larger than life kind of guy and Grandma Areba was a wonderful example of a compassionate lady. We spent a lot of their time going out to dinner and seeing the island. 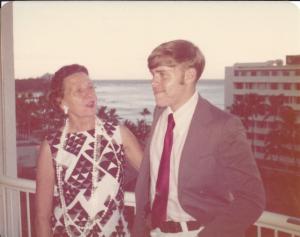 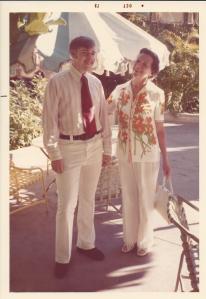 I had been away from home for over a year at that point and was very homesick. Having them visit was a pretty good respite but truthfully, I was pretty nervous about my first patrol. I didn’t realize it at the time but it would be the last time I was the old Bob. I did not realize at the time that I was saying goodbye for the last time. I left on patrol shortly after the visit. The rest of this story is about the start of a long journey home. 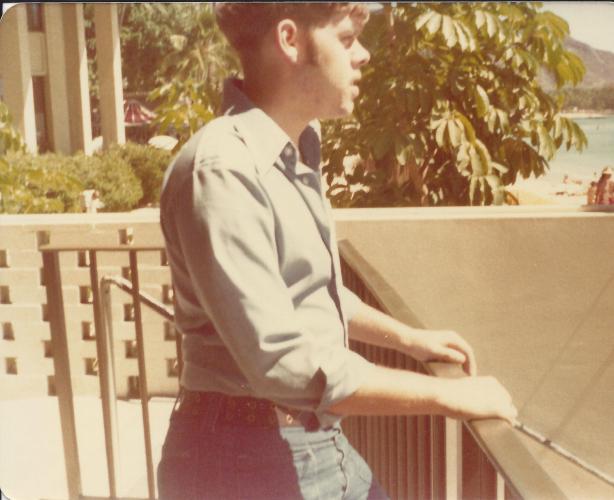 The USS George Washington had returned from patrol and conducted another intensive refit. The patrol had been exciting in a lot of ways. This patrol was chosen to do a test firing of four ballistic missiles and as one of the “hot runners” on board, I was given the opportunity to pick one of the missiles that would be fired. I had mess cranked most of the run and was finishing up my qual card when the Captain asked me to pull the numbers out of the ball cap. The test was very successful from what I remember and I finished my cranking duties just in time to join A gang in the refit turnover. Thankfully, I was used to not sleeping so the next ten days went by pretty quickly.

Coming back from patrol was like coming back to the world after having been locked in a cave. We had very little communications since family grams were the only way people could reach us. And of course, there was no such thing as email or the internet so telephones were the only way to reach half way around the world to say help to the family. Besides, you were so busy, who had time. The last few days before coming into port were sleepless too but for a different reason. Sine your world is put into limbo while you are on patrol, all of the unfinished business from before patrol came back to pay you a nightly visit.

In my case it was a fight with my Father that had gotten out of control. Plus I was hearing less and less from my fiancée even before the patrol and had received no family grams from her at all. When we arrived and the sacks of mail arrived, there were no letters either. As much as you try and put that into the back of your mind, it finds its way back to the front pretty quickly. But as I said, the work is pretty hard and you finally fall into a routine to push it all out of the way.

The day finally arrives and you do the turnover topside (in the rain of course… this is Guam after all). Down the hatch to retrieve your seabag, back up and over the brow to the Proteus. Down the long gangplank (hoping the OOD doesn’t notice that you haven’t had a haircut in a really long time). The waiting bus takes you and your shipmates to Anderson AFB where a civilian aircraft under contract is waiting to take you back over the seas on a long flight to Hawaii.

We had purchased some duty free liquor which was not as well regulated back in the day and it wasn’t long before it worked its way into the crew’s hands. Later flights would not be like this one as the rules changed, but this one turned into a real party. At one point the stewardesses stopped coming to the back of the plane.

After the warm buzz of the booze wears the excitement down a bit, some slept and some just sat staring straight ahead. You can only imagine what was going on in some of their minds. Getting ready to see your newborn baby for the first time. Trying to figure out a way to explain to your wife how you lost $500 in the patrol long poker game. Wondering if your wife would even be at the airport after that horrible fight you had before you left. Or thinking about the girl back home and how good it would feel to finally hold her. So much to look forward to. And always that one creeping thought in the back of your mind… in less than seventy days, you would be heading back again.

What happened after that is for another story. The joys and disappointments of coming home from any journey are as many as the waves in the sea. While many return trips from patrols were traumatic, I can hardly imagine the trips home that my brothers and sisters in arms made as they returned home from their own personal “patrols”. I remember seeing the soldiers in the airports in the early seventies as they returned from South East Asia. They seemed to have a certain look that can only be described as “distant”. Most of those boys are in their sixties and seventies now. Since that time, more have joined them as the wars in Iraq and Afghanistan have lasted for such a long time. Some came home physically, but many have just never made it back mentally.

So where is home?

They say that once you have seen Paris it’s hard to get the boys to stay down on the farm. What that really means is that war and service during periods of conflict change you. I truly believe that people who have never served can sympathize with returning vets but can never really understand the things they saw and went through. The reason so many men come back and become drifters and homeless is because they can’t find that home they once had. They often just don’t fit. I have had three men very close to me who chose to end their lives rather than continue the struggle to come all the way home. I have had others that led destructive lives that passively subtracted days and years from their lives in their own personal struggle. As the young men and women from the current struggles return, their numbers are increasing too.

Maybe that’s why I have done what I once thought was unthinkable. I have become my Dad. I have belonged to the American Legion for over thirty years and now am actively working with the local post. I recently joined the VFW which had also been one of Dad’s passions. USSVI Sub Vets, MOAA, and the Navy League all fill up the rest of my dance card.

It’s not because I like the hats all that much. It’s because these organizations are the best hope of making sure a fickle congress and an even more fickle public never forget that they have a contract with those who serve. Less than one percent of the population has carried the burden for their fellow citizens and that is burden which must be met with a sacred trust to protect them when they need it most. The VA has an unprecedented backlog of cases and can’t seem to fix the problems. Congress recently decided to try and pay some of the enormous debt it has on the backs of the very service members they promised they would protect. The organizations I have listed are the last thin line between honoring a promise and breaking faith with those who have given so much.

Find a group that knows who you are. Support that group with your service. Encourage others to come home too. We need you now more than ever.