Those were words used to describe one of the greatest Battleships ever to sail the seas in defense of freedom. The USS Nevada (BB-36) was the second IS Navy ship to be named after the 36th state and was the lead ship of the two Nevada-class battleships. Her sister ship was the USS Oklahoma. 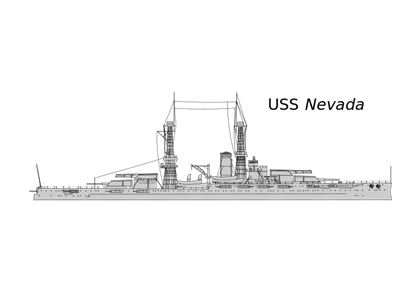 Her keel was laid on November 4th 1912 and when she was launched a short two years later, she represented a great leap forward in almost every technology associated with dreadnoughts. The three key technologies that made her both radical and revolutionary were features that would be included in every future US battleship (as well as many of their subsequent enemies).

The first was the development of the three gun turret. These monsters were 14” superfiring canons that could place a concentrated firepower on any ship in existence and pound through the armor protecting their inner skins.Nevada was built with two three gun turrets and two two gun turrets giving her a slight edge over anything built before her time. 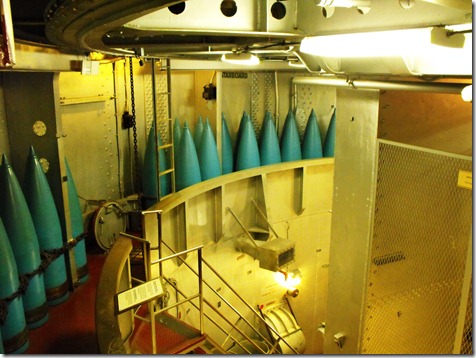 The second part of the revolution was her conversion to oil rather than coal. Previous dreadnoughts and most other ships built at the end of the sail era were powered by coal. While coal was a leap forward in its own way, the need for refueling placed serious limitations on fleet movements. When the Great White fleet had sailed in previous years, it was a dramatic show of the US capability to extend itself into previously difficult areas. The Japanese particularly were alarmed by the ability of the fledgling fleet to exert such a powerful influence.

But the need for coaling stations around the world was a weakness that would impact the fleet’s ability to stay on station. Plus, coal powered ships were very manpower intensive. First, the colliers were required to constantly be in motion and manpower was a key method to moving the coal from point a to point b. Second and more important, large engineroom crews were required to fuel the boilers underway. 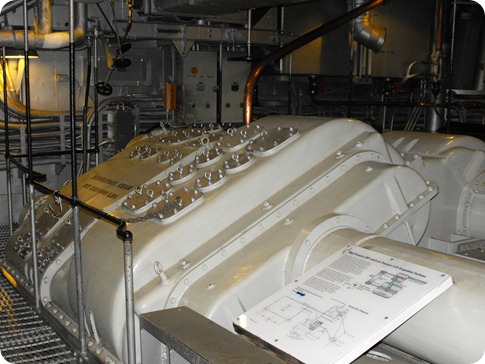 Ship design was affected by having more logistical support for the larger crew which reduced the amount of space for other critical items. Third, coal is not as as efficient as oil in a naval environment. Conversion of the fuel to energy was not nearly as great resulting in lower steaming days and shorter distances.

“using oil gave the ship an engineering advantage over the earlier coal-fired plants,as oil is much more efficient than coal because it yields "a far greater steaming radius for a given amount of fuel". The ability to steam great distances without refueling was a major concern of the General Board at that time. In 1903, the Board felt all American battleships should have a minimum steaming radius of 6,000 nmi (11,000 km) so that the US could enforce the Monroe Doctrine.”

Using oil would result in replacing 100 firemen (stokers) and 112 coal passers with 24 enginemen. This would eliminate crews quarters saving weight for other items and reducing the amount of fresh water and provisions that a ship would need for extended operations.

The third revolution was the new placement of armor. Instead of spreading thin armor over all areas, Nevada focused on critical areas such as the magazines and engines. 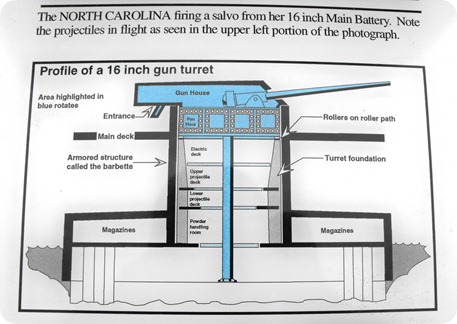 This radical change became known as the “All or Nothing” principle. Protecting the vital innards of a ship was never done before the “Standard Battleship” design was adopted. The idea was that if you protected the ammunition, steering and engines of the ship, she could better survive any type of attack known at the time. (Note: prior to Billy Mitchell proving the tactic’s vulnerability to air power tactics, the Navy was still focused on surface and sub surface attack strategies.)

All three of these radical designs and ideas would set the stage for the major battles to be fought in the century of surface warfare. Nevada would go on to fight in both World Wars and prove the reliability of the builders who designed and made her. 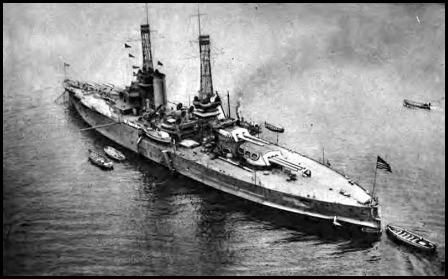 She rose from the mud of Pearl Harbor to help our troops in both theaters of operations. 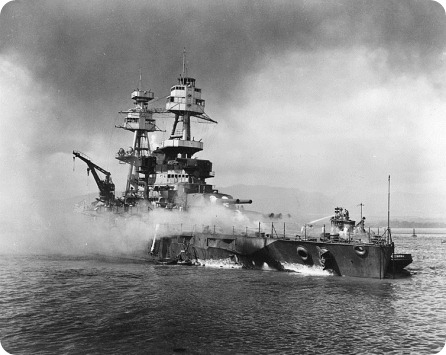 She served faithfully throughout the war ending up victorious in Tokyo Bay.

Even in her dying days, she showed her unwillingness to give up. After being involved in two nuclear tests, she was used as a target vessel for the USS Iowa which ultimately failed to sink her. Her end came at the end of an air launched torpedo. 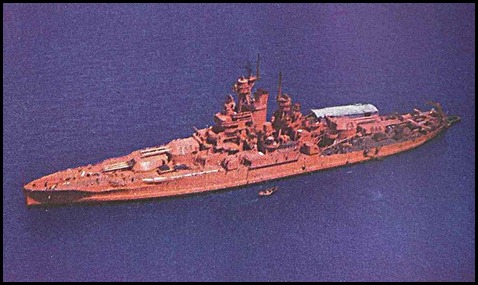 The daring designers and innovation that created her are hallmarks of the American spirit. A need was identified, methods were created to overcome the need, and we had the national will to execute and operate this technology. American know how and capability were employed to create something that set the stage for victory. The real question is, could we do it again?

Someone famously said that the world is no longer a game of “Battleship” because of newer technology.

Sadly, they trivialize the vision that still needs to be present in an increasingly dangerous world. The greatest threat to our future is ignorance of the past and the leap forward in technologies represented by American power projection. In the history of mankind, there have always been dictators and tyrants. Nations have coveted the lands and resources of other nations. The weak get chewed up and spit out by the strong. Projecting weakness to pacify your opponent only encourages them to build bigger weapons to ensure your complete subjection.

America has been great because it understands the changing nature of power and power projection. Having leaders willing to support that is and will be the link to a secure future.

God Bless America, and Thank you to the Men who sailed a great ship, USS Nevada BB 36

4 thoughts on “All or Nothing”