Fire in the night

Growing up in a steel town, I learned the terms associated with making steel at an early age. At night, the sky was orange from the glow of the furnaces and the cooling steel that emerged. No one who has ever lived near a mill can forget the burning sulfur like smell that seemed on some hot summer nights to be coming from the bowels of hell itself. The whole valley where I lived seemed to be permanently coated with the black soot from those mills but we were all the beneficiaries of their output. Stores flourished, schools grew, the roads were well cared for and you always had the feeling that there was a way for you to live in a better way than your parents. 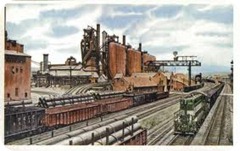 The steel valley had lasted for what seemed like an eternity.

Generations of men and women from far countries came to take their turn at the pots and picked up their shovels to keep the beast fed. Hard working immigrants built the valley and longed for the day when their children could grow up and live a better life. Their hard work built the educated generation, enhanced by the GI Bill brought back by the millions of returning veterans. 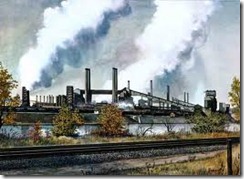 Make no mistake though; there was conflict along the way. The riots of Andrew Carnegie’s day were pure examples of a type of typical class warfare. That warfare was driven by people who saw others with riches and privileges that were born from others hard work and sacrifice. Unions and union breakers were all along the rivers of the Monongahela and Allegheny and pored over into the Ohio. The organizers were masters at stirring up class warfare and let it churn until it blew up into a blazing fire that cast neighbor against neighbor and even family members against family members.

The country stayed together during the World War 2 but by 1945, cracks started appearing everywhere. Strikes of the coal industry and railroads had to be overridden by the Federal government and the steel industry had its own problems with more and more wildcat strikes. The war was coming to a close and the feelings of desperation no longer kept the two sides aligned.

The unions felt that they were due a large reward for the sacrifices their people had made and the company saw a need to reinvest in equipment for the challenges that would result from the peace. Rebuilding the shattered world offered opportunities for everyone if somehow they could stand together. But again, the enemy called class warfare shrugged off any sense of opportunity and brought a bitter divide back to the forefront.

The mighty have fallen before

There are too many reasons why the Steel Valley came tumbling down from its heyday to begin to document in one blog. Greed, foreign competition that stole through the cracks, changing socio-economic dynamics, governmental interference and on and on that steadily brought a slow drumbeat of defeat to the valley. The one term from the industry that had always helped them in the past was that when things needed to be done, they were galvanized.

Galvanization is an interesting term. Steel and iron rust when left exposed and galvanization is a way to slow the growth of rust. As strong as steel can be, it is made weak by corrosion. The galvanizing process reduces the corrosion by becoming a sacrificial anode that catholically protects the exposed steel. When you remove the galvanization, the steel rusts and decays more quickly. Its strength is systematically stripped away until it no longer bears the weight it was designed for and the structure crumbles

After three years of watching the steel structure of the United States of America being corroded by incessant class warfare, the decay is starting to weaken us to the point of no return. This “rust” destroys the very fabric of what this nation was made of. Our right to pursue happiness is not reliant on taking from someone else. It is the belief that with hard work and effort, our steel will be strong and the structure will endure. Class warfare is an insidious evil that allows those who know how to foment it to attack the one thing that kept the structure strong.

When the elements of steel are bonded together nothing can defeat us. When you pull them apart and allow corrosion to enter, the structure will fall.

We have one chance left.

We can galvanize against this threat. We can coat ourselves with the spirit of individual freedom, the passion to return to a place where we are all capable of being a strong part of the structure, and bring back the bedrock principles of the Founders.

Rust (in the form of those who would use divisive measures) will always be with us as it has throughout the generations of man. Envy and greed are strong propellants and require constant attention. If we can find the strength and source to galvanize once again, even the weakest will see that it is better to stand together than to fall divided. The one thing that class warfare dividers never tell their victims; when you have made the structure weak, everyone becomes weak and we all become rust. If you lose the people who have made the money you want to take, where will your money come from when they are destroyed? 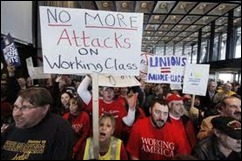 The Republicans are running out of time to effectively complete the galvanizing process.

The far left has provided the warning and you can find weakening of the basic structure everywhere. The press daily reinforces the echo of fundamental change. It is time and the leadership has a golden opportunity to stop the spread of corrosion but time is running out. If we don’t stop the spread soon there will only be one answer… when steel no longer serves the purpose for which it is cast, it either becomes scrap or it needs to be melted down again so that it can be reformed into a stronger form. The fire that will melt it will come from the burning of everything that came before.

I am reminded of the story of the silversmith in Malachi

1 “I will send my messenger, who will prepare the way before me. Then suddenly the Lord you are seeking will come to his temple; the messenger of the covenant, whom you desire, will come,” says the LORD Almighty.

2 But who can endure the day of his coming? Who can stand when he appears? For he will be like a refiner’s fire or a launderer’s soap.

3 He will sit as a refiner and purifier of silver; he will purify the Levites and refine them like gold and silver. Then the LORD will have men who will bring offerings in righteousness