Compared to some Navies around the world, I suppose the US navy is still in its infant stage. From my perspective, it has certainly seen its days of glory interspersed with rumors of demise. Those rumors of its premature death normally come with change. Sails to steam. Capital ships and sleek modern warriors. Cannon balls to missiles. One thing that never seems to change though is the adventurous spirit of those who choose a life of sea going service. Diesels to Nukes.

I have had the picture above over my desk for a number of years. My brother and his family sent it to us one Christmas and it somehow struck a chord. Tom and I served on the San Francisco (SSN 711) together for three years so we shared a seagoing experience and a lot of memories. The picture just struck me as a true depiction of what real old salts would look like.

Not long ago, I found a book that I use as a reference from time to time. It is called “Naval Customs, Traditions, and Usage” written by Lieutenant Commander Leland P. Lovette, US Navy. The book is a hardback copy and cost $2.00 postpaid in 1939 from the Naval Institute Press.

It’s a great book for those of us who love Naval History and was written shortly before Pearl Harbor. The book gives you the flavor of the Old Navy before the catastrophic attack against America in December of 1941. The influx of so many millions of Officers and Men during the war changed the character and the flavor of the Navy as it had never been changed before and citizen sailors of that period redefined what a sailor was.

In the book, there is an inserted photograph next to page 43 taken by Assistant Surgeon H. W. Whitaker (US Navy) taken on board the USS Mohican in 1888 of the four old salts. In fact, the card I have over my desk is a replica of that picture. 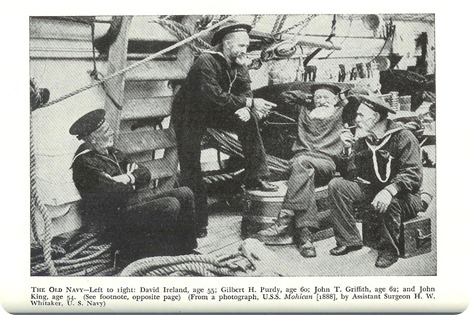 On page 43 is a footnote that explains who the mystery men on my wall were:

“This picture, ‘The Old Navy,’” wrote Captain J. K. Taussig, “depicts for us a rare combination of characters. We have here in Purdy the spinner of yarns and exploiter of theories – different from the usually accepted ones – but always of sufficient interest to guarantee and audience. In Ireland we have the serious minded listener – a man of character who loved his ship and who loved to stay on board preferring to save his money to spending it on a good time. King typifies the sailor of the stories; one who loved rum and who spent his money freely whenever he had the chance. He was the type that was absolutely reliable on board ship, but did not see that the beach was for any other use than a place where one could get drunk. Griffith shows us the old man who has matured in the service – the kind that acquired none of the bad traits, but all of the good traits of the old time sailor.” – US Naval Institute Proceedings, XLVII, no. 215.

I can’t help but feel that I knew these guys. They have been the core of the US Navy since it first began. The only thing that kind of concerns me now is that I used to think 60 was old…

The Navy is going through a number of changes again. Based on comments I see on the Navy related boards these days, a lot of my former shipmates are worried we won’t make it through the fog this time. I can almost hear Gilbert Purdy now;

“Those young whippersnappers are gonna just ruin this here Navy, you mark my words. Why, I hear they’re even talking about putting bunk beds on ships now instead of hammocks. Yep, heard it from an old shipmate of mine. He seen it with his own two eyes down to the Philly shipyard. These younguns will be spoiled rotten.What won’t they think of next? This man’s Navy is going straight to hell, you mark my words, straight to hell!”

Then old John Griffith quietly replies; “Purdy, you just keep spinning those old yarns. I been around long enough to see the changes that came and went. Some stuck, some didn’t. In the end, as long as there are a few old salts around and the country still needs defending, there will always be a Navy. Might not look the same as when we had the helm, but it will always be the Navy.”

From the position of someone who is rapidly approaching Griffiths age, I reckon I agree with him.

for more of the back story on the Old Salts

5 thoughts on “The Old Navy”