One of the worst things I can imagine a service member doing is being guilty of dereliction of duty. We all take an oath to uphold and defend the Constitution. When we are derelict in our duties, there are military laws which judge us and rightly so. People depend on us to defend them and protect them from forces beyond their ability to defend themselves.

Friday afternoon, the Democratic leadership in the Senate refused to pass a continuing resolution that would not only fund the government’s operations but will cut off additional funds to FEMA by early next week. Harry Reid and his fellow Democratic Senators left after a hasty news conference to catch a plane for South Carolina (Taxpayer funded of course).

This morning (September 24th) at the beautiful and luxurious Kiawah Island Resort in South Carolina the Democratic Senatorial Leadership team is resting after blocking funds for FEMA.  This is just a sample of some of the things they are suffering through for the American people still recovering from the floods:

“Your private table may overlook splendid surf, lagoons, gardens or fairways, while you dine on exquisitely  prepared award-winning native foods complemented by the perfect wine or beverage. Your day might begin with a leisurely breakfast on the oceanfront, a bountiful buffet before your morning tee time or gourmet coffee and a continental breakfast at the market.” 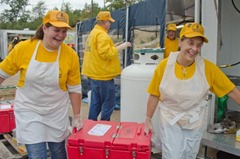 After this sumptuous feast, Harry and his donors will ride out to the well manicured greens and spend the day figuring out how to get more money into the democrat coffers. The fairways can be a little rough this time of year, but Harry and his friends will be doing their best to keep a brave face.

The accommodations at Kiawah can be a little challenging too for the out of Towner’s. Rumor has it that some were actually forced to sleep in rooms with only a partial ocean view. Senior aides to the Senator were furious upon finding out that the best rooms were already booked for another meeting but hotel officials assured them that the alternative rooms would be just as desirable.

As always, guest will be provided with surprise gift bags as they spend time with their hosts. Rumor has it that a special shipment from Cartier’s was spirited in during the night to mark the special occasion.

Meanwhile, more rain is predicted across the Susquehanna Valley all the way into New England. Evacuations were once again ordered in some counties in preparation for the flooding that will follow.

Hopefully it will not impact this evening’s tribute dinner for the millionaires and their wives  who continue to make all of this possible for Senator Reid and friends.

Dereliction of Duty? You be the judge.

2 thoughts on “Dereliction of Duty”