One of the saddest days of my life was the day we left Dunoon Scotland and the Holy Loch so many years ago. It was 1991, our tour was shortened by the end of the Cold War drawdown and I was headed to a tour as M Division officer on the Hunley. But we packed a lot into that short tour of fourteen months.

We arrived at the end of summer in 1990 to take over the duties on the USS Los Alamos AFDB 7 as the Docking and Repair Officer. The Los Alamos was one of the best investments ever made in Naval history. It was originally designed as a seven section floating dry-dock. Both seven and ten section dry-docks were built  to be big enough to be transported to a forward base in the Pacific and provide forward repair services for ships as large as the Iowa class battleship or a host of smaller ships. At that time, it was a huge savings of time and battle resources since it meant that damaged ships would no longer have to take the slow and perilous journey back to Pearl Harbor or the west coast ship repair facilities.

After the war, the AFDB 7 was broken down into sections and towed to its berth in Florida where it would sit waiting for another mission. That mission came when the Polaris program was born and the need for overseas bases became critical. The range of the missiles on the early boat was fairly limited so they would lose precious time transiting from US bases on their way to the patrol areas. The waters in Holy Loch Scotland were determined to be deep enough and easy enough to protect if need be so she was one of the sites chose to support the boomers. 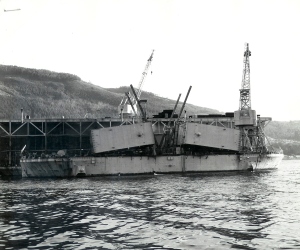 I have a cruise book from the Los Alamos that one of my guys put together and it chronicles the way the LA was reassembled once she arrived in Holy Loch. The original design was devilishly simple. The walls of the dock were laid flat on the deck of the individual barges. You used giant jacking devices to put them upright and then connect all the piping and electrical connections. The berthing and machinery spaces (plus the galley) were housed in the individual barges and all of those were connected together as well.

When the LA was originally designed, she was a seven section drydock. The engineers determined that in order to dock a Polaris submarine, you only needed four sections. A couple of cranes, some upper level repairs and an overhaul every few years kept her running smoothly for over thirty years. 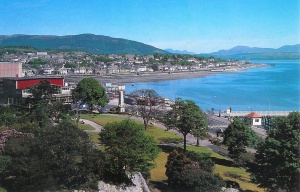 In between dockings, the crew spent a lot of time in the wee town of Dunoon Scotland. Over the years, Dunoon had adapted herself well to the visitors. The sailors from the submarine tenders, the boat ops gangs and the visiting bubbleheads kept an awful lot of people employed for many years. It was rumored that there were more taxi’s concentrated in Dunoon than in any other location in Scotland but you know who rumors are. One thing is for certain was the number of pubs. I had heard of the infamous Pub Crawls before but walking up and down the main streets of Dunoon, you could almost feel the souls of all the past crawlers making their way up and down the way.

One of my favorite memories however was the Annual Cowal Highland Games. Can you possibly imagine 150 bagpipe bands gathering in one field (often over 3000 pipers) and playing amazing grace? The whole day was exciting with athletics and dance competitions rounding out the group and solo pipes contests. 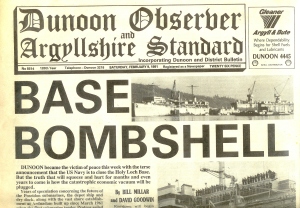 Like all good things, our tour came to an end much too soon. Dunoon still hosts the games each year (this one is coming up soon from the 25th to the 27th of August).  http://www.cowalgathering.co.uk/  My dream is to go back once more before I do my final checkout.  I would highly recommend the same for you!

8 thoughts on “Bagpipes and Boomers and Beer, oh my!”