As part of submarine month 2022, going back and looking at some early posts from the blog… This theme keeps coming back over and over

An Ohio class submarine slips its mooring next to the Delta pier in Bangor Washington.

Silently, she glides down the flat calm waters of the Hood Canal on her way to the open ocean. 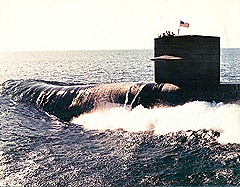 This five hundred sixty foot vessel will soon submerge and begin her primary mission. For over fifty years, ships like this have provided an umbrella of security for the nation and freedom loving people everywhere. The very threat she represents have ensured that no one during the entire history of Fleet Ballistic Missile (FBM) submarines has ever launched a nuclear missile against us.

From the US Navy Fact files:

“The Navy’s fleet ballistic missile submarines, often referred to as “Boomers,” serve as an undetectable launch platform for intercontinental missiles. They are designed specifically for stealth and the precision delivery of nuclear warheads.
Ohio class SSBNs can carry up to 24 submarine-launched ballistic missiles (SLBMs) with multiple…