What’s in a name? The Saga of the Jinxed Sea Otter

Even before the United States entered World War II, an old nemesis from the last World War was making its presence known: the submarines of the German Navy.

Sea commerce was the life blood of the British Empire and in 1940, America was already slanting heavily towards what would become their allies in the war that would come after December 7, 1941. British and other ships were already feeling the effects of the devastating attacks and the newspapers were filled with harrowing tales of destruction and survival. So, it is not a surprise that the United Sates Navy and others would look at better and faster ways to build ships with revolutionary new designs. One such design was called the Sea Otter.

The Sea Otter II was launched on 23 August 1941 by the Levingston Shipbuilding Co., Orange, Tex.; sponsored by Mrs. Eads Johnson, wife of the designer. It was acquired by the Navy on 26 September 1941 and placed in service on 26 October 1941.

Sea Otter II sailed first to the Charleston Navy Yard on 26 October 1941, arriving on 2 November. After completion of voyage repairs, Sea Otter II got underway for sea trials on 4 November.

Constructed during the height of enemy submarine attacks along the Atlantic coast, Sea Otter II was designed to allow torpedoes to pass beneath her shallow draft. The draft, however, proved to be almost twice the amount expected, and her 16 unmuffled gasoline engines would be noisy enough to alert any submarine in the area.

Consequently, Sea Otter II, like her predecessor, the 80′ shallow draft Sea Otter I, was destined for little use. She remained at Charleston until being placed out of service on 28 May 1942. On 26 June, she was transferred to the War Shipping Administration, subsequently transferred to Cargoes, Incorporated, and struck from the Navy list on 8 May 1946.

In February 1941 Navy Commander Hamilton V. Bryan and Warren Noble, an automobile engineer and production specialist, met and brainstormed ideas for a new way to transport cargo across the Atlantic despite the submarine threat. They ended up with a simple ship, flat sided and flat bottomed, built of 36-inch strip steel and machine welded, and powered by sixteen automobile engines in groups of four driving four vertical propellers shafts that extended below the bottom of the vessel amidships. These shallow draft vessels (except for the propeller shafts) could supposedly be built at low cost in large quantities. The inventors, who in the meantime had recruited yacht designer W. Starling Burgess of Weaver Associates to the project, called their ship SEA OTTER because hopefully, like its namesake, it would be skillful at eluding its enemies. 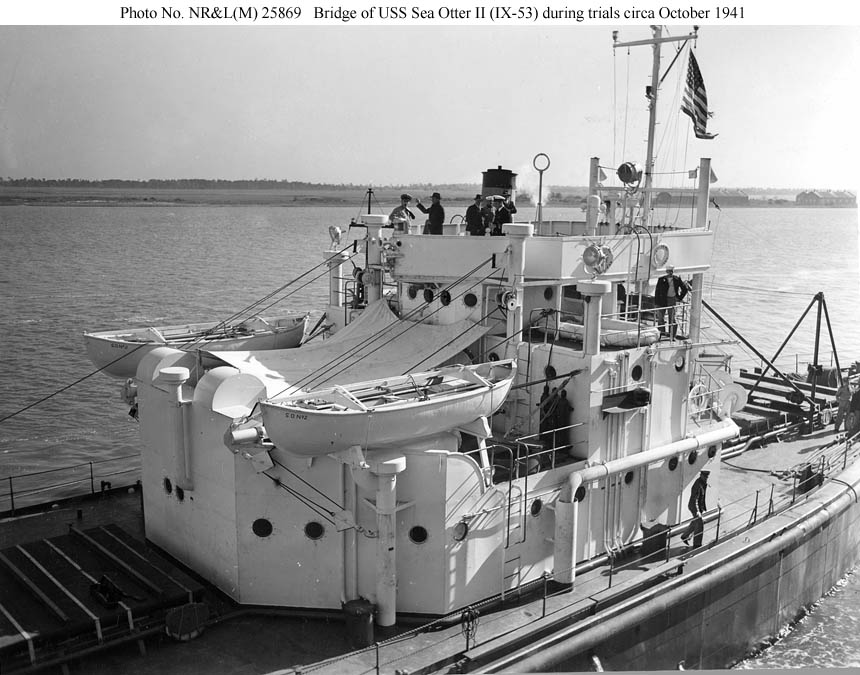 The scheme was received with great skepticism in professional circles but attracted the attention of President Roosevelt who got the Secretary of the Navy, Frank Knox, involved. In early 1941 the inventors secured enough money from wealthy individuals in the President’s circle to build an 80 foot model SEA OTTER, and they then signed a contract on 6 Mar 41 with Jacobson’s Shipyard in Oyster Bay, New York, to build the model.

IX-51: On 16 May 41 Roland L. Redmond, the titular owner of the vessel, offered the Model Freight Carrier SEA OTTER then under construction at Oyster Bay, N.Y. to the U.S. Navy for experimental purposes. On 21 May 41 the District Craft Development Board recommended to SecNav that she be acquired for $1.00 as a district craft for experimental purposes, to be classified as an Unclassified vessel (IX-51).

In response SecNav on 21 May 41 directed CNO to issue the instructions necessary to proceed with the acquisition and CNO recommended that BuShips proceed with negotiations with the owner. The craft was “completed, launched, and made a successful sea trial” on 24 May 41 and was acquired at the builder’s shipyard at Oyster Bay, New York, five days later. She was placed in service at Oyster Bay on 9 Jul 41 for Navy trials. She was referred to as SEA OTTER until the advent of the full-sized SEA OTTER, at which time she began to be called SEA OTTER I. The model performed her trials either very well or miserably depending on which account one reads. On 20 Oct 41 CNO directed Com-3 to place the vessel out of service and prepare the propelling unit for shipment to the Naval Engineering Experimental Station, Annapolis, Md. The hull was to be “disposed of in accordance with further directive.” On 8 May 42, in its report that definitively rejected SEA OTTER II for naval use, BuShips directed that the 80-foot model be returned to its owner or scrapped.

IX-53: Before the Navy trials of the model SEA OTTER began, President Roosevelt authorized construction of a full size SEA OTTER, soon designated SEA OTTER II, using Lend-Lease funds. On 16 Jun 41 the British submitted Requisition No. UK 2005 for a gasoline propelled vessel at a cost of $350,000. The Navy kept Bryan and Burgess out of this phase of the project and picked marine engineer Eads Johnson to oversee production of the vessel and a shipyard at Orange, Texas, Levingston Shipbuilding Co. to build it. On 24 Jun 41 SecNav directed BuShips to enter into negotiated contract with Levingson for construction of a “gasoline propelled vessel of the so-called Charon type, SEA OTTER #2, ex BAK-1.” The vessel was accepted from her builder after initial trials and placed in service on 25 Oct 41. She departed the next day for the Charleston, S.C., Navy Yard and, after being delayed enroute by mechanical problems, ran trials at Charleston in November 1941.

The British observers objected to the use of gasoline fuel, to the overall draft of the propellers for the wide-range tidal harbors in England, and to its size, and rejected the vessel. On 11 Dec 41 CNO directed that she remain at Charleston until further orders. In December the firm that had been created to build up to 48 more SEA OTTERS, Ships Inc., decided against the gasoline design. A diesel SEA OTTER was proposed in January 1942 but quickly rejected within the Navy.

On 8 Mar 42 the Preliminary Design Branch of BuShips proposed using the SEA OTTER II hull as a target barge for testing new torpedo protection schemes, but when this idea was referred to the Auxiliary Vessels Board later in March it informally recommended that it be converted into a fuel oil barge (YO).

Senators Gillette, Democrat, of Iowa and Brewster, Republican, of Maine discussed the question of the Sea Otter type of ship construction with President Roosevelt at the White House today and reported afterward they felt the Sea Otter idea is entitled to a fair trial and a full opportunity to develop its feasibility. The Senators reported the President very much interested in the Sea Otter. The Senators are members, with Senator Gerry, Democrat, of Rhode Island, of a special Senate Naval Affairs Subcommittee investigating the Sea Otter proposal.

“We don’t feel that the Sea Otter proposal has been thoroughly or sympathetically looked into,” Senator Brewster told newspapermen. He said that the President’s interest dates from the inception of the idea and that this morning he appeared “glad to know of our support in what he is trying to do”—increase the size of the merchant marine.

Senator Gillette, chairman of the subcommittee, said the group tomorrow would receive the views of Chief Engineer Slack of the Chrysler Corp., which designed the Sea Otter engine. Mr. Gillette said the subcommittee then will write its report. The subcommittee was set up late in February to find out what happened to the Sea Otter idea. Senator Gillette said that on September 19 a “roseate” press release from the Nary Department about revolutionizing the construction of small cargo teasels through the Sea Otter plan, and then the plan “disappeared from public view”.

The SEA OTTER saga was not over when the Navy rejected a diesel variant of the craft in January 1942. Allies of the original SEA OTTER advocates, who had been sidelined in the production of SEA OTTER II, brought the matter to President Roosevelt who on 4 Apr 42 directed that SEA OTTER II be tested further and that Commander Bryan be assigned to work with Weaver Associates to redesign the craft. 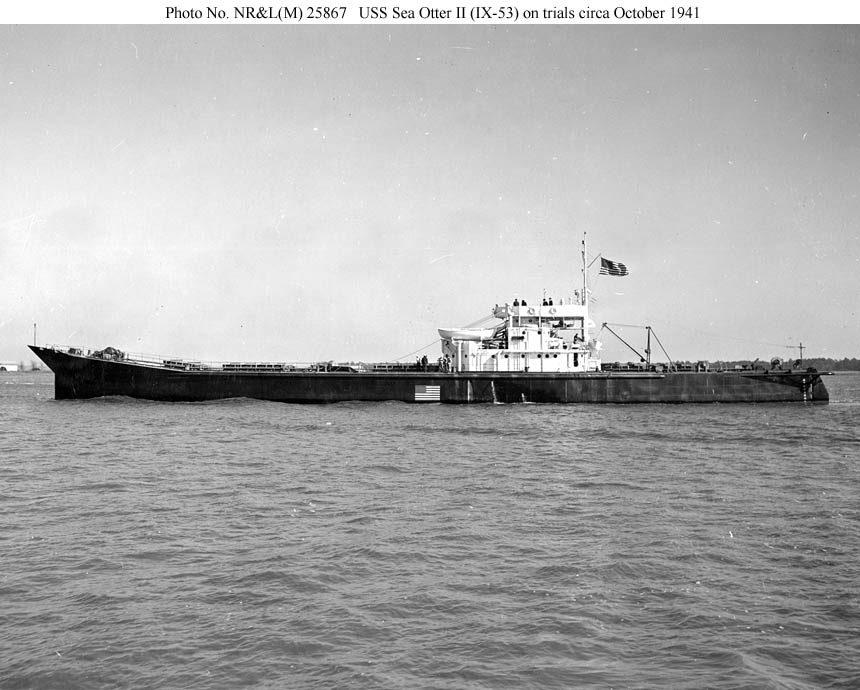 Self-propulsion tests were scheduled on 22 April 1942, and on 8 May 42 a BuShips report concluded that “low stability and freeboard, tenderness, and limited cargo capacity of 560 bbls of fuel oil precluded Navy use.” On 16 May 42 Bryan and Weaver’s design for a new SEA OTTER was designated SEAMOBILE.

New Seamobile, Using Automobile Engines, it Will Be Put in Mass Production

The Seamobile will differ slightly from the prototype in size, but she will embody the qualities which made the Sea Otter a brand-new example of naval construction. She will be propelled by automobile engines and will be put in mass production. Mr. Roosevelt has high hopes that she may help solve the British and American shipping problems.

Studies are being made in connection with redesigning with the idea that the boat may be put to three uses—small cargo ships, small tankers and a corvette type to be used for convoy protection. It is reported that consideration will be given to utilization of the boats in American coastwise traffic, which might enable releasing larger transoceanic vessels for overseas travel. With the construction of the Seamobile will end as strange a runaround, threatening to terminate in a dead end as has ever plagued a politics-ridden democracy.

A congressional committee investigated the run-around and declared that, the ship had never been given a fair chance. The White House gave orders to proceed with its construction. There continued, however to be stubborn opposition from civilian quarters in the Navy Department who were opposed to any change in the orthodox types built by private shipbuilding concerns. The opposition was so stubborn that even the Presidential orders failed to override it.

President Roosevelt, in order to avoid a collision with members of his official family, skirted around the problem by taking the Sea Otter out of the hands of the Navy and putting her under the jurisdiction of the Lease-Lend and the W. P. B. During the run-around given the Sea Otter she had acquired in some sections of the Navy Department the reputation of being a Jinx ship, destined never to float. In this case the jinx was man-made and the President used the method he had seen employed in business concerns when things are not going as well as they should. He confided to a White House intimate that sometimes a failing concern could be revived by changing its name and one or two of the directors and managers. So the hitherto unlucky Sea Otter was rechristened the Seamobile and started on her way toward mass production. Members of Congress who took an interest in the ship are glad that the issue has been satisfactorily settled.

Meanwhile, back at the Navy

BuShips received the final plans for SEAMOBILE on 30 Jun 42, by which time model basin tests had been completed. The next move was up to Lend-Lease, which on 24 Oct 42 awarded a contract to the U. S. Shipbuilding Corp. of Yonkers, New York, to construct the first SEAMOBILE. SEAMOBILE I was essentially a small 1,800 ton quadruple screw diesel tanker with a conventional layout (except for the four shafts) and none of the innovations of SEA OTTER.

Completed in August 1943, she was renamed SAN JACINTO in 1946, S. E. GRAHAM in 1953, and scrapped in 1958 after a collision. However by mid-1943 large numbers of the far more efficient and effective Liberty ships had been produced, and no more SEAMOBILES were built.

It’s interesting how politics and the Navy are so intertwined.

I always chuckle a bit when people tell me that they don’t like to see the two used in the same story.

Yet even in war time, the influence and effects of politics are never very far apart.