We regret to inform you.

The attack on Pearl Harbor was so swift and deadly that the military was not prepared to deal with the consequences of not being prepared for war: Identifying the souls lost and notifying the families about their loss. Considering the number of dead and wounded, it should not be a surprise. No one could have imagined such a devastating blow. When the ships in the harbor were torpedoed and bombed, large stocks of fuel and ammunition were suddenly turned into weapons of mass destruction that killed and wounded many of the men serving.

Battleships carried large amounts of oil. The burning hulk of the Arizona alone contained a frightening mix of unexploded ammunition of every kind in addition to over a million gallons of fuel when fully loaded. Even the lowest seaman in the Navy recognizes the inherent danger of fire to an afloat vessel.

So when the Arizona, West Virginia and the other ships finally did succumb to the multiple attacks, the remains of the crew members would have been nearly unrecognizable. The same is true for the remaining parts of the fleet that were attacked that day.

The Army and Army Air Corps were also hit with fierceness and ferocity as the Japanese attackers sought to neutralize the planes and support crews that might mount a defense against them. The chaos resulted in many men being initially listed as killed.

There were two stories for January 8, 1942 that stand out as examples of the impact on people.

“Early official casualty lists named George Tyler of Huntington Beach as “lost in action.” The city planned a memorial and Tyler’s father tried unsuccessfully to enlist in the Navy to avenge his son. 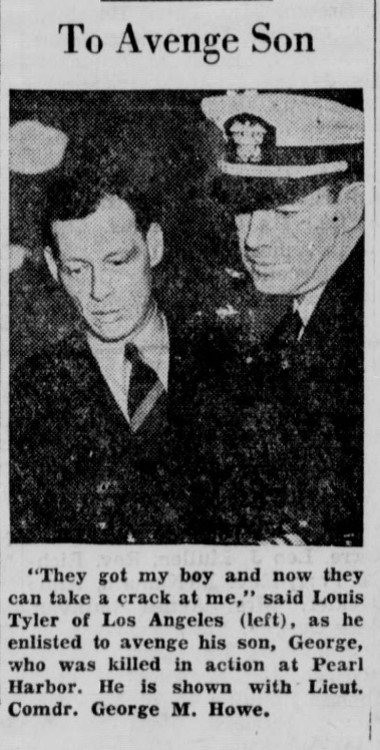 According to Census records, George was born in 1923. He would have been 18 on December 7th. One can only imagine the devastaion this news must have caused for the family. George was the middle son of five.

Then on Dec. 23, the Orange County Register headlined “H.B. Youth Reported Killed in Action Very Much Alive.”” No additional details were published at the time.

On November 11, 1991, The Times Orange County edition reported on page A12 that two Orange County residents, George Tyler of Huntington Beach, and Robert Morgan, died at Pearl Harbor on December 7, 1941. Tyler was said to have been aboard the battleship West Virginia and Morgan aboard the mine- laying ship Oglala. Questions have been raised about whether the two men, in fact, were killed in the attack. Note: I spent a considerable amount of time combing through the archives and found no record of Tyler being killed on the West Virginia that day. He simply disappeared from the war and no records of a later death were recorded.

Affectionately nicknamed “Wee Vee”, USS West Virginia was commissioned in in December 1923.  She was moved to Hawaii in 1940 with the US Pacific Fleet and was the youngest of all the battleships at Pearl Harbor.

USS West Virginia During the Attack 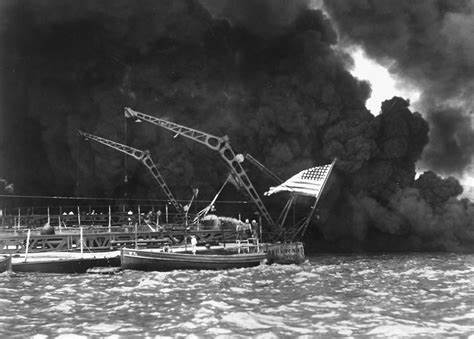 Only one Japanese midget submarine was able to clear the torpedo net. It is believed that this submarine used both torpedoes on West Virginia, accounting for two of the nine torpedoes that struck her. However, that claim has not been proven.

Of the thirty six torpedo hits that Japan claimed West Virginia took nine. West Virginia was luckier than Oklahoma because only one of the nine torpedoes struck above the armor belt. That luck, however, was only relative.

The dive bombers were focused on the inboard ships, but there was one dive bomber hit on West Virginia. Perhaps more dive bombers would have hit if it was not for the smoke coming from Arizona‘s raging fires.

A bomb similar to the one that destroyed the Arizona hit West Virginia. It penetrated the six-inch roof armor, but turned out to be a dud and only damaged a loading slide.

Nevertheless after dive bombers, high level bombers and torpedoes were finished West Virginia was sitting on the bottom of the harbor.

Pearl Harbor is quite shallow. There was only 40 feet of water below West Virginia‘s keel. This prevented her (and California) from sinking completely. The shallow waters also helped in raising and eventually repairing her. Had she been at sea, it would have been a total loss.

West Virginia was also at the Battle of Iwo Jima and the Battle of Okinawa. After the war ended on August 15, 1945, “Wee Vee” sailed to Tokyo Bay, where she would be for the Japanese surrender on the deck of Battleship USS Missouri.

After sustaining great damage at Pearl Harbor, West Virginia, went on to fight strong in WWII and earned five battle stars.  After an illustrious career, she was decommissioned in 1947 and eventually sold for scrap in 1959.

Identifying the lost sailors has been an ongoing mission.

On Dec. 7, 1941, Melton was assigned to the battleship USS West Virginia, which was moored at Ford Island, Pearl Harbor, when the ship was attacked by Japanese aircraft. The USS West Virginia sustained multiple torpedo hits, but timely counter-flooding measures taken by the crew prevented it from capsizing, and it came to rest on the shallow harbor floor. The attack on the ship resulted in the deaths of 106 crewmen, including Melton.

The only listing in the military archives for a George Tyler from California was this: TYLER, GEORGE L RDM2C NAVY 03823819 MONAGHAN; UNITED STATES NAVY 12/18/1944 Philippine Sea

The Monaghan played a key role at Pearl Harbor. Since the West Virginia was out of commission, it is entirely possible that George cross decked to the Monaghan.

Monaghan sank in December 1944 with only six crewmembers being rescued.

It would be interesting to see if anyone had more luck finding out what actually happened to George Tyler.

The second story comes from an article from the Associated Press on January 8, 1942.

George W. Baker was inducted into the army on November 11, 1940. His branch of service was listed as the Army Air Corps. He trained at Fort Slocum, New York before being transferred to Wheeler Field, Hawaii on February 6, 1941. That was where he was stationed as a Private First Class when the Japanese attacked.

Over the course of the next month, his mother would get three notifications form the Army informing her that her son was dead. The last notification included the information that his remains were being returned to the states.

According to the Associated Press article of January 8, 1942, George was surprised to hear of his demise.

George did survive the attack and went on to distinguish himself as an Officer in the Army Air Corps.

He was predeceased by his wife, Isabelle Helen (McSherry) Baker on June 3, 1995.

He was a member of Elias Evangelical Lutheran Church, Emmitsburg; was a 1st Lt. in the U.S. Army Air Corps during World War II; a member of V.F.W. Post 6658 and Francis X. Elder, American Legion Post 121, both of Emmitsburg; and a member of the Pearl Harbor Survivors and the Eighth Fighter Group Association.

Surviving are three children, Connie Fisher of Emmitsburg, Sharon Yates of Houston, Texas, and George W. Baker of Altoona, Fla.; four grandchildren; a number of great-grandchildren; and one great-great-granddaughter.

“My parents were notified on the 10th of December I had been killed. They were not notified until December 24th I was alive even though we were told to write a letter home soon after the attack. Due to priorities the mail was very slow leaving Hawaii.”

His story based on his own writing is here: https://www.emmitsburg.net/archive_list/articles/history/memories/George_baker.htm

You really owe it to read George Baker’s whole story. He would never call himself this, but after reading it, I would consider him a hero on a grand scale.

I can hardly imagine the sadness of receiving one of those telegrams from the War Department of Department of the Navy. Families had little access to news of the war that was not censored. But January of 1942 was just the beginning of a long series of messages that would be sent back to anxious family members. It would be a long war.  They always are for the loved ones who stay at home and wait.