I was thinking last night how many hats I have worn in the course of my lifetime.

I think as a child you wear a lot of hats in the winter time and of course there is the baseball cap in the summer. But for the longest time, I did not want to wear a hat. In the late sixties and early seventies, young people were letting their hair grow out. I know it was part of the whole rebellion thing but it was also a bit of vanity.

Other than that obnoxious band helmet we were forced to wear for marching band, I don’t think I even owned a hat until the summer of 1972. 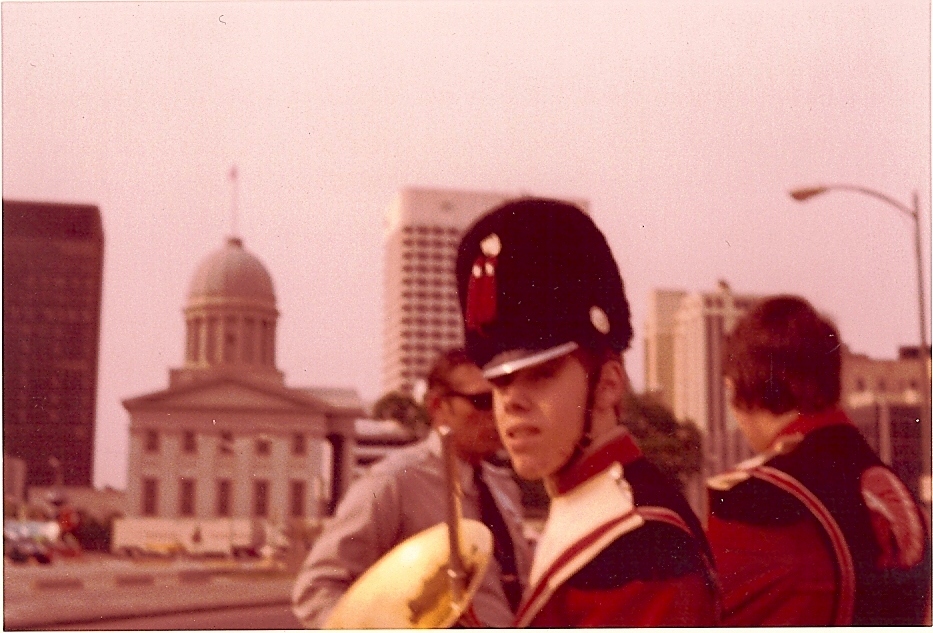 Then, I joined the generations of men (and women) who suddenly found that hats were not only not an option, they were mandatory.

In fact, the Navy issued me hats for every season and every reason.

We started with the black knit watch cap that indicated we were fresh and completely untrained. As we went through our training, it was sometimes supplemented with a blue ball cap and eventually with a white Dixie cup. You mostly wore the hat under penalty of some kind of obscure punishment unless you were in the Chapel or the Dispensary. Walking outside without your cover was indeed a bold statement that often was followed by pushups or endless trips around the grinder. Finally, graduation day came and you got to put away the temporary boot camp hats for the stenciled white hat that would be part of your uniform until you finished your enlistment.

There were some temporary blips in the whole hat scheme. At one point the Navy wanted to mirror the other services by issuing us suits with combination caps. But soon enough, that fad faded and back came the bell bottoms and jumpers that identify you as a sailor. And that infamous white hat.

My Dad used to call it a “sailor’s halo”. I am afraid mine may have slipped a time or two. thankfully, we had no cell phones with cameras back in the day so our sins are known only to God and anyone who was with us that day or evening.

I changed hats once more when I made Chief. Then one last time when I made Chief Warrant Officer. Selfishly, I am really glad that the Navy restored the combination cap for that transition.  I also have a full collection going back to my first boat of all the command ball caps we wore on submarines and ships. Some are in pretty bad shape. Maybe someday I will throw them all away. Probably not anytime soon though. I also have nearly all of my Dad’s hats from his life. I guess he meant to throw his away too at some point and never got around to it.

When I retired, I joined a long line of hat wearing people we call Veterans. I should point out that not all Veterans belong to one of the service organizations like the Legion or VFW. A lot of people just didn’t have that much fin and don’t want to relive the glory days they never had. But I have noticed over the years that the Navy or Army or whatever service ball cap has made a comeback. Maybe its seeing everybody else on social media sporting a cap with a unit or organization name on it. But I see a lot of hats. I have about ten in my current rotation. Some are generic Navy, a couple are from my submarine days and a few very special ones are from my favorite boat, the USS San Francisco SSN 711. The current version is kind of tan instead of the old Navy blue but it is special to me anyway. It was a gift from a brother and I will probably ask to have it in my coffin. I wouldn’t want to be without a proper hat when I go to see Jesus. And frankly, I am sure he won’t buy the whole sailor’s halo.

Yep, hats are the easiest way to spot a brother or a sister. You can spot them in Walmart, out on the streets walking, in the airport and in any one of a thousand places. Those hats are like a homing beacon for veterans and I always stop and thank them for their service. The other day at Dennie’s we saw an older gentleman with a Vietnam hat on. I stopped and said welcome home brother. He was so genuine and friendly and the things that may have separated us vanished in an instant. We were just two old warriors that shared a common bond called sacrifice. I noticed a cane next to his chair but when we shook hands, I looked into the eyes of a twenty year old who had just got off the plane from southeast Asia.

So happy Veteran’s Day to all my hat wearing and non-hat wearing brothers and sisters.

Thank you for all you did for this country and for your sacrifices.

I will keep wearing my hats until my last day.

To be perfectly honest, I no longer worry about messing up my hair.

In fact, its kind of nice to have something to keep the back of my head warm these days.