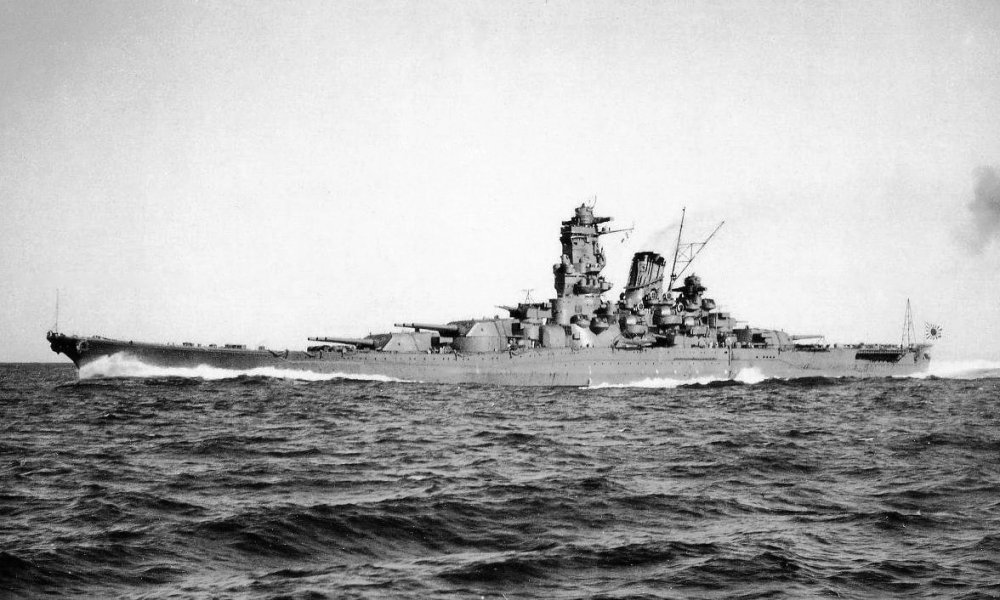 Seventy years ago today (April 7 1945) marked the end of the Japanese battleship Yamato and her escorts.

By this time in the war, ceaseless American bombing and submarine attacks had decimated the Japanese fleet and support activities. As the battle for Okinawa raged, the Yamato set sail with just enough fuel to make it to her destination – the supporting American battle fleet in and around the island of Okinawa. This was designed from the start to be a one way trip and try and inflict maximum damage on the hated Americans.

Yamato was the lead ship of the Yamato class of Imperial Japanese Navy World War II battleships. She and her sister ship, Musashi, were the heaviest and most powerfully armed battleships ever constructed, displacing 72,800 tonnes at full load and armed with nine 46 cm 45 Caliber Type 94 main guns. Neither ship survived the war.

Starting on April 1st, the actual invasion was moving brutally through the island in an attempt to establish a presence in Japan’s backyard. This base would be the launching point for much of the planned invasion of Japan that would follow. Kamikaze attacks were exacting a heavy toll on American ships and the plan was for Yamato to take as many American ships to the bottom with her as possible. The ultimate Kamikaze attack that would be coupled with the submarine attacks already being attempted.

Unfortunately for the Japanese, things did not go as planned.

On April 6 and 7 (East Longitude Dates) the enemy attempted strong counterattacks against our forces operating in the vicinity of Okinawa.

During the late afternoon and evening of April 6, a large force of enemy aircraft attacked our ships and shore installations in the vicinity of Okinawa. One hundred sixteen of these enemy aircraft were destroyed‑55 by our fighters and the remainder by our antiaircraft fire. The attacking enemy aircraft pressed their attacks in with desperation and succeeded in sinking three of our destroyers and damaging several destroyers and smaller craft. No larger fleet units were hit.

Early on April 7, Navy Search Aircraft of Fleet Air Wing One sighted an enemy surface force which had left the Inland Sea and passing south of Kyushu had headed into the East China Sea. The force included the large battleship Yamato, the most powerful ship left in the Japanese Navy, an Agano class light cruiser, one other small light cruiser or large destroyer, and a number of destroyers. A fast carrier task force commanded by Vice Admiral Marc A. Mitscher steamed toward the enemy at high speed and dur­ing the middle of the day brought the Japanese Force under air attack.

Our carrier aircraft which had destroyed 245 enemy aircraft on April 6, met no opposition over the Japanese ships but did meet heavy antiaircraft fire. At a point about 50 miles southwest of Kyushu they sank the Yamato, the light Agano class cruiser, the small cruiser and three destroyers. Three other destroyers were left burning. About three destroyers escaped from this attack.

The Yamato was hit by at least eight torpedoes and eight heavy bombs. All the enemy ships were heavily strafed with rockets and machine guns.

Our carriers lost seven aircraft in this action. During minor contacts on April 7, they and their aircraft shot down 30 enemy aircraft. The task groups participating were commanded by Rear Admirals F. C. Sherman, U. S. Navy, A. W. Radford, U. S. Navy, G. F. Bogan, U. S. Navy, and J. J. Clark, U. S. Navy.

With her sinking, the age of the battleship as ruler of the seas came to an end. Battleships would continue to operate intermittently for the next half century but the specter of a rampaging behemoth of the seas ended with the deaths of both Yamato and Bismarck.

6 thoughts on “An inglorious end… sinking of the Yamato”