Freedom for millions of people and wars without end were almost guaranteed when President Roosevelt completed his trip to Yalta and came home . In a joint session to the Congress on March 1 1945, President Roosevelt reported informally about the results of the recent Conference at Yalta. While brushing off the prickly questions of the future of both Poland and Yugoslavia, he made these statements about the results he had achieved in regards to gaining Soviet cooperation:

“At the Crimea Conference, the Americans made a proposal on this subject which, after full discussion was, I am glad to say, unanimously adopted by the other two Nations.

It is not yet possible to announce the terms of that agreement publicly, but it will be in a very short time. 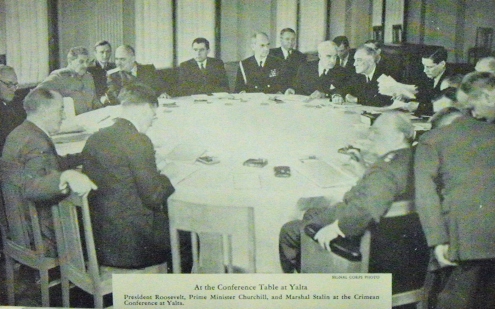 When the conclusions reached with respect to voting in the Security Council are made known, I think and I hope that you will find them a fair solution of this complicated and difficult problem. They are founded in justice, and will go far to assure international cooperation in the maintenance of peace.

A conference of all the United Nations of the world will meet in San Francisco on April 25, 1945. There, we all hope, and confidently expect, to execute a definite charter of organization under which the peace of the world will be preserved and the forces of aggression permanently outlawed.”

That “fair solution” of course would set the stage for every single conflict in the world since 1945: Granting the Soviet Union (and later Russia) a permanent veto power in the Security Council. This power was and is still exercised regularly on every major global conflict with a strict application that favors Russian interests. This betrayal of freedom cast a horrible shadow over the Eastern Europe countries for generations and still plays out on the world stage. Stalin flanked both Roosevelt and Churchill and by the time the world saw the maneuver for what it was, it was too late.

One of the most fateful parts of his speech indicated the depth of the deception which was played out by the Soviets. That very deception is still in play around the same countries to this very day.

Roosevelt: “We met in the Crimea, determined to settle this matter of liberated areas. Things that might happen that we cannot foresee at this moment might happen suddenly—unexpectedly—next week or next month. And I am happy to confirm to the Congress that we did arrive at a settlement—and, incidentally, a unanimous settlement.

The three most powerful Nations have agreed that the political and economic problems of any area liberated from Nazi conquest, or of any former Axis satellite, are a joint responsibility of all three Governments. They will join together, during the temporary period of instability—after hostilities—to help the people of any liberated area, or of any former satellite state, to solve their own problems through firmly established democratic processes.”

This lie was the single biggest contributor to the Cold War which followed. Stalin had no intention of allowing the former countries to seek their own destiny. He wanted power, land and peoples to rule in his new world order. The very same lands he betrayed in his pact with Hitler now found themselves given over to his evil desires.

Roosevelt: “The final decisions in these areas are going to be made jointly; and therefore they will often be a result of give-and-take compromise. The United States will not always have its way a hundred percent- nor will Russia nor Great Britain. We shall not always have ideal answers- solutions to complicated international problems, even though we are determined continuously to strive toward that ideal. But I am sure that under the agreements reached at Yalta, there will be a more stable political Europe than ever before.

Of course, once there has been a free expression of the people’s will in any country, our immediate responsibility ends- with the exception only of such action as may be agreed on in the International Security Organization that we hope to set up.”

As we watch another administration “negotiating in good faith” with another evil empire, one only has to wonder what the world map will look like when we capitulate this time.

God please spare us from ideologues before all freedom is lost everywhere.