The summer of 1942 was not just a horrible time for merchant shipping long the east coast of the United States, it was also one of significant losses in the Atlantic

U-boats were coming out in larger and larger numbers and even the convoy systems were being tested to the limits with the existing escorts. Russia had finally entered the war on the side of the Allies and was facing tremendous pressure on the home front from rapidly advancing German armies. Stalin knew that his survival now rested with supplies from the allied forces and he demanded that they provide him with the tools and weapons to defend the Motherland.

PQ 17 was one of the first joint convoys that combined units of the British fleet with American fighting ships and escorts. On June 27th, the assembled ships left for the Soviet Union and because of a number of factors, suffered a special type of hell for the next ten days. In the words of Admiral Dan Gallery, the man who orchestrated the later capture of the U-505 submarine, this incident was a “shameful page in naval history”.

Some of the factors which contributed to the disaster were the weather and light conditions. At that time of year, the light stays bright much longer. On my first trip to Sweden during the month of late June I had been told to expect a different type of evening but as I lay in bed at 2330 that first night, I was amazed at how much light still remained. This light would make it  much harder for the ill-fated convoy to escape the marauding planes from the Luftwaffe.

The second major influence was the number of U-boats that were on patrol in the area. German U-boats were strategically placed to support all of the raids of the convoy through the Arctic and their damage was both effective and efficient in carving away the number of ships that were in the convoy.

The third concern at that point in the war was that the Germans had superiority in the air. The flying squadrons of the Luftwaffe were placed well along the lines of the convoy’s run and there were no escorting carriers available of any number to counter the relentless air attacks.The air forces also could be used to direct submarine attacks and control how the survivors would be chopped to pieces.

The major threat in the eyes of the Admiralty though was the presence in Norwegian waters of the German battleships Tirpitz, Lutzow & Admiral Scheer and cruiser Hipper. Up to the night of the fourth of July, air raids and submarine attacks had already taken a toll. Faulty intelligence sealed the fate of the doomed convoy. First Sea Lord Pound received word that the major German ships may have sailed and were on their way to destroy the remaining convoy and her escorts. Escorts and warship were still in very short supply this early in the war and the fateful orders were passed at 21:36 for the convoy to “Scatter” and make their way as best they could to the Russian ports. 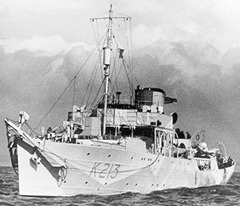 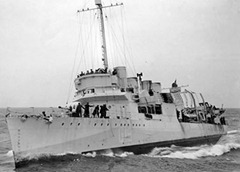 The German surface forces never arrived. It was too late for the hapless merchant ships that were left to fend for themselves. The Allied merchant ships became easy targets for the U-boats and aircraft. During the course of the day on the fifth of July, torpedo bombers sink 5 merchant ships and British rescue ship Zaafaran while several others are damaged. U-88 and U-703 each sink 2 while U-334 and U-456 sink 1 each, including several vessels damaged or stopped by the bombers.

In all 26 of the 39 merchant ships were lost to the slaughter.

Thousands of vehicles and hundreds of tanks and planes were lost not to mention the poor crewmen who manned the ships. The British high command recognized that it could not sustain that loss rate and support Operation Torch in North Africa so they suspend further convoys for a time. Stalin was furious and even accused his Allies of making up the entire affair in order to let him fail in the face of the German onslaught.

Prime Minister Winston Churchill called the event  "one of the most melancholy naval episodes in the whole of the war." A later  inquiry assigned no blame to anyone, since orders were issued by the First Sea Lord. American Admiral King distrusted the British in the early days of the war and diverted the next convoy to the Pacific where the Americans controlled the escort ships directly. It would take many months for trust to be rebuilt between the Allies and even then it was trust with strings attached.

An interesting viewpoint for the battle can be found here: http://www.pq17.eclipse.co.uk/index.html

From the Diary of Engine Room Artificer Jack Bowman

“Saturday, July 4th. | FATAL DAY German planes still making swoops at us, and shadowing. At 1800 suddenly the sky is black with bombers and the attack is on. It was a small hell let loose. As far as is known, all these were carrying tinfish. One of the merchant ships, it must have been an oiler, sank within five seconds. Soon the sea was covered with boats and rafts and bodies. As far as I know, three ships were sunk and some abandoned, but later were boarded again (note 3). All this time neither cruisers, battleships, or aircraft from the carrier came to our assistance. I suppose they were looking for the German fleet. Later on the Admiralty signaled all destroyers to leave the convoy and try to engage the Germans. The convoy was to split up, every man for himself. We seemed to be in a very hopeless situation. Soon ships seemed to be racing in every direction. Our captain decided to go north. Two or three followed us.”

“Sunday, July 5th. By this morning we could get no further because of icefields. We are 15 degrees off the North Pole. What a sight! Icebergs as big as Orrest Head (note 5), all a lovely bluey-green, covered with arctic birds. I think we have covered about 200 miles trying to get round these icefields. At 1600 another Admiralty signal. Two German battlewagons and eight destroyers were likely to intercept that night, or early morning. Imagine our feelings. By this time we were beginning to lose hope. Remember that we had never had our clothes off for a week, and nerves were becoming taut. I never lost hope myself, but felt very sorry for one of my stokers whose nerve has gone. I was prepared, if given the chance, to sell my life very dearly. My only regrets were those I loved at home. A fog set in and we must have lost the fleet.”

Seventy years ago the radio waves were filled with the cso0unds of desperate merchantmen calling out over their band. "Am being bombed by a large number of planes", "On fire in the ice", "Abandoning ship", "Six U-boats approaching on the surface.”

As the crews drowned in the icy waters or burned on ships that had been left helpless to a pursuing enemy, I wonder what their last thoughts would have been. I can’t help but think some of them wondered “Why”? before the sunk below the waves.

As I look at our defensive situation today, I am more and more worried about that question as well.

Politicians with other priorities in the past forty years have already allowed our merchant fleet to be dissolved. Our shipbuilding industry has been crippled by outsourcing on a scale that is too massive to understand by most. As newer threats emerge, our fleet is designed to fight a completely different war. Would we be able to manage safe passage for the ships that provide us with the oil and other vital resources that keep our country moving forward? Or will we find ourselves on some night in July ordering the hapless unarmed ships carrying those supplies to “Scatter”

I hope we never have to find out. I hear the Iranians are planning a nuclear submarine.