I like to think that I have done my share in life to try and protect the things that I cherish. My Navy time, my service to the communities I have lived in as well as Churches and other groups. But every once in a while, I get the chance to be humble again. You run into something that has given so much to this country without fail that you are barely able to contain what it really means.

I have been a huge fan of Battleships since I was a kid. I don’t know why for sure since none of the three generations before me ever served on one. But I do remember building the models as a kid. Missouri, New Jersey, Iowa and of course Wisconsin were the big daddies. 16 “ guns fore and aft. The Alabama and North Carolina were also pretty high on my list and although slightly smaller, they packed just as big a punch.

I can only imagine what the citizens of any country would have imagined to see one of these big boys showing up off of their coast. I know that when they were fired for the last time in the Gulf in 1991, it probably made a distinct impression on the guys who received incoming fire that never even saw her fire.

Top that off with the Tomahawk cruise missiles that showed up late in her career, and you had a formidable weapons platform. 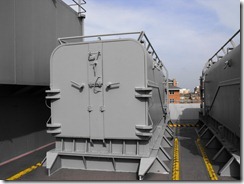 Add to that arsenal the Harpoon launchers, CWIS anti missile defense, 5” 54 caliber twin mount guns and capacity to add hundreds of small arms, and you have a surface ship that will show your intensity in no other way possible.

In the same museum, you get to see the history of the US Navy form its early days. I met a man who like me relishes a good story.

He told me the story of the USS Pennsylvania, one of the old sailing ships built before the Civil War. It was built in the Philadelphia Naval shipyard and was completed in 1839. The ship was built in a time of great financial challenge and only made one voyage. That voyage was to the Norfolk shipyard where she was to be clad with copper on her bottom. The financial situation got increasingly worse and the project was buried and never completed. 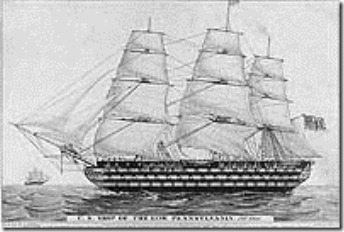 When Virginia was succeeding form the Union, the ships in the Norfolk Naval shipyard were set on fire to keep them from falling into the hands of the Confederates. The ill-fated Pennsylvania was one of those ships. This 120-gun ship of the line never fired a shot in defense of her country. As in so many cases, short sighted politicians last their vision at just the wrong time in America’s history.

I suppose it’s a gamble. Ships like the Iowa class battleship (including the Wisconsin) served this nation for many years and had battle decorations from World War 2 through Gulf 1. She saved many lives and supported the Marines and Navy through many battles. What if the peace mongers had stopped her and her sisters from being completed?

Well, I recommend a visit to the floating monuments to our Naval Power. Take your kids. It may be the last we see of America’s Naval predominance. It will be good for the kids to know what might have been.

One thought on “Humbled”