I haven’t thought about this story in years and was reminded this morning about the tragedy of Flight 19. On December 5, 1945, Flight 19, made up of five TBM Avenger Torpedo Bombers left Naval Air Station Fort Lauderdale to conduct advanced overwater navigational training.

As I began thinking about it, it occurred to me that the tragedy for the families must have been stunning. After all, by December of 1945 the Japanese had surrendered, the boys were starting to make their way back home from overseas posts, and the joy of Christmas without a war was just starting to settle into the American experience. Since that fateful attack on December 7 four years before that, Americans had grown use to the loss of so many men in combat in faraway lands. So the event that unfolded on December 5th must have been tragically shocking for the people left behind.

The flight was executing navigational problem number 1. This problem would follow the following route: 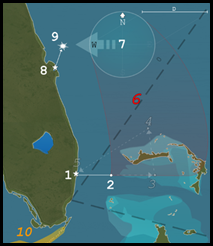 “The flight leader was United States Navy Lieutenant Charles Carroll Taylor who had about 2,500 flying hours, mostly in aircraft of this type, while his trainee pilots had 300 total, and 60 flight hours in the Avenger. Taylor had recently arrived from NAS Miami where he had also been a VTB instructor. The student pilots had recently completed other training missions in the area where the flight was to take place.[2] They were US Marine Captains Edward Joseph Powers and George William Stivers, US Marine Second Lieutenant Forrest James Gerber and USN Ensign Joseph Tipton Bossi.

Each aircraft was fully fueled, and during pre-flight checks it was discovered they were all missing clocks. Navigation of the route was intended to teach dead reckoning principles, which involved calculating among other things elapsed time. The apparent lack of timekeeping equipment was not a cause for concern as it was assumed each man had his own watch. Takeoff was scheduled for 13:45 local time, but the late arrival of Taylor delayed departure until 14:10. Weather at NAS Fort Lauderdale was described as "favorable, sea state moderate to rough." Taylor was supervising the mission, and a trainee pilot had the role of leader out front.”

The last intercepted transmission from the flight indicated that the instructor was unable to determine where the Florida coast was and the compasses on all the planes were acting in an erratic fashion. The planes only carried so much fuel and it was determined that by 2000 that evening they would have ruin out of fuel. A water landing would have been very hard since the waters in the area were rough and very unfavorable to such a landing. Attempts to establish communications on the training frequency were impossible near the end due to static and interference from the nearby Cuban radio stations. All communications with the group were lost and they were never heard from again.

Search planes were sent to find the lost flight and one which left at 1930 on the same day the flight left also disappeared and was never heard from again. The formal search for all planes was called off on the evening of December 10th. 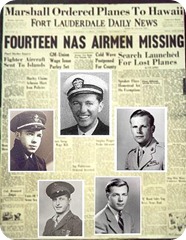 Over the years since that time, the legends of the Bermuda Triangle have tickled the imaginations of many aircraft enthusiasts. One version of the full story can be found here: http://en.wikipedia.org/wiki/Flight_19  A more comprehensive search will provide a reader with hundreds of theories of cover-ups, conspiracies, and so on. Only one thing is clear from the transmissions: The Pilot in charge became lost and the normal tools and methods failed to get him back on course. In the end, he directed them to wait until the last fuel was exhausted and they would all land in the same place. Unfortunately, the TBF was notorious for bad landings and their loss was almost certain.

Some of the questions that have arisen (besides the obvious mechanical failures) are around the behavior of the remaining pilots. Some had indicated that if they just flew west, they might have a chance. Yet none left the formation. Each followed their leader to what was surely a watery grave. Some blame their training. The group must always stick together under the leadership, even if the leader has lost his or her way.

In this case, the result was tragic no matter what the reasons.

In the American Journey we are on today, we are led by people who have access to the best technology and seemingly unlimited resources to help keep us on course. Yet for three years now, we seem to be flying around lost trying to get back on course. Maybe, just maybe it is because the main Pilot decided to ignore over 200 years of directional guidance in order to map out a new course that is fundamentally different than the old one.  We have abandoned our traditional procedures to achieve his personal goals without having the infrastructure in place to support that new direction.

Like Flight 19, the other leaders who are following our Pilot probably see from their years of experience that we are hopelessly lost. All of the traditional indicators and common sense tell us that we are. The realization that we only have a few more gallons of fuel (national treasure) are painfully obvious. Will we soon see the jagged tops of a rough sea crashing toward us at a blinding pace? Or will we find a few leaders who will wrest control from the people who have completely lost their way and return us to base where we have a chance to survive for another day?

Personally, it never made much sense to me that we would allow someone who has never flown a plane of any kind be in charge of the squadron. Maybe a hot air balloon though… I suspect he could keep that baby aloft for years.