Oh happy day, break out the bubbly, the Nation’s first gay marriage at West Point. I can barely contain my joy.

Oh well. They can explain it to the big Guy themselves when the time comes. I am now officially done with worrying about traditions.

I had no idea that we would eventually become a trend setter. First, the novelty VP Joe “Gotcha” Biden comes out and supports gay marriage. Or was it just Joe “Coming Out?” Next, the Obaminator is forced to stop prevarication and admit that his “evolving days” are finally over. Andrew Sullivan is practically slobbering over himself despite the actual lack of commitment by team Oblama. Wow… even  liberal Maureen Dowd bitch slaps the old boy for his floppy moves this week.

Now, one of the Mean Spirited Republicans and his Bully friends try to stick up for God and the Bible by introducing legislation to keep Military Base Chapels free from violating the very words and beliefs they have held up for hundreds of years:

Why is this even an issue?

The chaplains will receive training to conduct the civil unions once the Department of Defense ends its ban on gays in the military, Navy officials said Monday.

“If the base is located in a state where same-sex marriage is legal, then base facilities may normally be used to celebrate the marriage,” read a memo from the chief of Navy chaplains.

Under the new training, any chaplains whose religious beliefs did not include gay marriage will not be required to conduct the ceremonies.

The Pentagon is slowly implementing its repeal of the 17-year ban on gays in the military. The new policy should go into effect some time this summer.

But a Missouri Congressman says the new guidelines for the Navy violate a federal law defining marriage as between a man and a woman.

“While a state may legalize same sex marriage, federal property and federal employees, like Navy chaplains, should not be used to perform marriages that are not recognized by federal law,” wrote Todd Akin (R-Mo.)

Chaplains are among the first group of service members to receive training on the new policy. ”

I see. We can’t afford to improve military facilities including health care and housing. We are struggling to figure out how to deal with Veterans with PTSD and homelessness. Yet this stupidly useless program to support a vocal minority of NON CHRISTIANS is stealing the money we so desperately need???????

Sodom and Gomorrah never had it so good.

So this past week, an attempt to make things a little right was started:

“The measure, which prevents “marriage or marriage-like ceremonies” between same-sex couples from taking place at American military bases, was approved by a 37 to 24 vote along party lines.

That amendment, sponsored by Rep. Todd Akin (R-Mo.) was approved by a straight party-line vote of 36 to 25.

Wait just a minute… Are you telling me that it might take an Act Of Congress to protect people who express something in public that is based on their core beliefs?????????

I have only two regrets about my wedding more than 31 years ago. The first is that I didn’t get married in my dress blues. The second is that we didn’t get married in a Navy Chapel. I have to be up front and admit that during my tours of duty, I was not always faithful about going to the chapel. I did pretty well in Boot Camp and A school but as I went through a round of schools at New London, Charleston, and Pearl before arriving on the George-fish, I either went to civilian churches or just plain didn’t go.

I did go to services on board (mostly around the holidays) but they weren’t very well attended and sometimes it was just too easy to catch some sleep on the one day you probably wouldn’t have drills or field days. Plus, there is something about battle stations missile on Christmas Eve that sort of knocks the spiritual right out of you. Rumor had it that the XO planned it to take people’s minds off the fact that we were on Patrol for Christmas AGAIN and all the fake holly in the world couldn’t replace some of the sadness of being separated from family and friends. 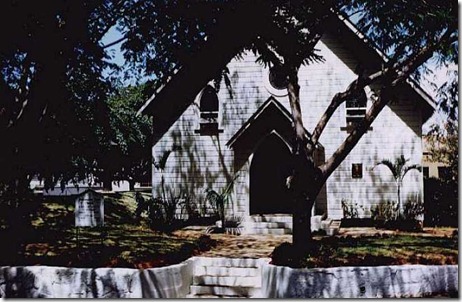 But the one Chapel that I did hold near to my heart was the Pearl Harbor Submarine Base Chapel nestled in among the buildings that made up the center of the upper base. The galley was across the street so it was kind of a Sunday ritual when I was in port and living on base. Later, when I came back to Hawaii with my new wife, we would use that Chapel as a place to go to try and continue to grow spiritually. We were not 100% attenders but I probably spent more time there than in any other Chapel in all of my military service (except maybe Norfolk Naval Base).

Anyone who has ever been to the Chapel knows the story behind how it was built. It had its beginnings with the arrival of the first Navy Chaplain assigned to the submarine base LCDR Thomas H Reilly. He arrived in the middle of World War 2 (November 1943). The base had no chapel so LCDR Reilly had to conduct a daily mass in the base library (Bldg. 654). Sunday Mass was held at Sharkey Theater which was an open air theater at the time.

The Chaplain saw how crowded the services had become and at first requested a Quonset Hut which was turned down. Disappointed but not defeated, Chaplain Reilly then did something that made him a true submariner: he had the Chapel constructed without authorization. He enlisted the help of a number of people and built the little Chapel on the site that it still stands. Rumor had it at the time that many of the materials for the Chapel were “redirected” from other projects and on September 10, 1944 the Chapel was dedicated to all the submariners who died in Word War 2.

The original colored glass windows were replaced in 1959 by panels fashioned after the original templates. From inside the Chapel a small submarine can be seen in the lower portion of each window. The bell in the tower came from the USS Argonaut (SS-166. The crew of the Argonaut donated her bell before leaving on her third war patrol. She never returned.

All hands were lost in a battle action off the coast of Rabaul on January 10th 1943. The bell still tolls for them and all of the boats that did so much to win the war.

For me, the little Chapel was and always will be

On Friday September 30th 2011, Defense Department officials announced that in conjunction with the ending of Don’t ask, Don’t Tell, Military Chaplains would now be allowed to conduct weddings in Military installations (including Chapels).

Spring is here, The sky is blue
(whoa-whoa-whoa)
Birds all sing As if they knew
Today’s the day We’ll say I do
And we’ll never be lonely anymore
Because we’re Going to the Chapel of Love

Because of actions taken by the ACLU, LAMBDA, and Governor Neil Abercrombie, Civil unions for same sex couples will be allowed in Hawaii starting January 1, 2012. How exciting for them.

How long will it be before we have our first ceremony between two sailors in that little chapel?

Bells will ring, The sun will shine

We’ll love until  – The end of time

And we’ll never be lonely anymore

Goin’ to the chapel and we’re Gonna get married

Gee, I really love you and we’re Gonna get married

Goin’ to the chapel of love

Those who follow me regularly know that I am mostly an advocate of changes that are happening in the world. I don’t think its possible to turn back the hands of time on many things so I try and look for the positive.

But I do have one request: If it’s at all humanly possible, can we ask that the Sub Base Chapel Pearl Harbor which has so much history and was dedicated to the memory of so many heroes be forever off limits to weddings that were not legal at the time it was dedicated.

I think its only fair.

By the way, congratulations to the Catholic Chapel at West Point. Its nice to see that somebody is courageous enough to stick to their beliefs in this whirlwind of political correctness.