We have moved 18 times in our thirty one years of being married and I moved quite a few times before that dating back to 1972. As far back as I can remember, I have kept two things with me in all of those moves. One is a tattered old World Atlas that I faithfully make a written entry in every New Years Eve about where I was that year and some key events. The other is an old metal lock box (the kind that is supposed to be fire resistant but you hope to never find out if it really is).

The box is kind of dusty since it sits under my desk most of the time. Its rarely ever opened except back in the day when I may have had one or two too many adult beverages and just wanted to see who I had been at some point in my life. On the outside of the box is a sticker I bought at Pensacola the year I went through CWO/LDO school that says “Its hard to be humble when you’re a Mustang”. The day after I bought it, Saddam Hussein invaded Kuwait so that tells you how old the sticker is. 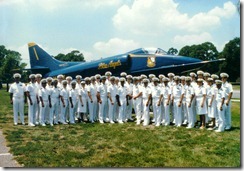 Inside the box is a collection of my achievements and reputation as represented with things from my old service records. I am a collector. Please, do not tell my relatives (particularly nieces and nephews) since I do not want to be featured on an episode of Hoarders. The box is fairly compact and hides well under the desk so it really will not cause me any harm. If Debbie has been willing to let me drag it from place to place over these many years, that should be good enough for everyone that knows me to just let me be.

The contents of the box are pretty meaningful and carefully archive much of my growth in the past forty years. Starting with Boot Camp, I have every certificate from every school I ever attended in the Navy. The certificates that followed are like a road map of my life. Great Lakes IL, New London CT, Charleston SC, Pearl Harbor HI, Mare Island CA, Norfolk VA, San Diego CA, Bangor WA, and a bunch of repeats over the years.

There are a few professional accomplishments too. Sadly, I lost my original Qual Certificate, but many others of personal importance managed to make it into the box. I particularly like the Master Training Specialist Award since I worked hard to achieve that standing. I am sure it helped to lead to the next important pieces of paper in the box; my authorization to wear the uniform and assume the title of Machinist Mate Chief Petty Officer ( August 16, 1987) and not long after that Chief Warrant Officer (July 1, 1990).

Three Honorable Discharges allowed me to wear Gold Stripes on my Chief’s uniform. You sometimes forget about the things that once mattered but I have to be honest, it was a good feeling to put all that gold on my dress blues. For my civilian friends, that means one of two things: for twelve consecutive years you either were a stellar example of a highly professional sailor or in some people’s cases it means you never got caught. The pay is the same either way and I knew a lot of really great sailors with red stripes. But it was a mark of honor to be able to put on the gold.

Most career people collect a lot of other pieces of paper along the way. Sailor of the Quarter, Letters of Commendation, Command awards for Battle E and Damage Control DC for instance. Some are highly personal and some are fairly generic but they all make up a record of sorts of the type of person you were perceived as along the way.

Performance evaluations and Fitreps collected along the way are reminders of the tasks you were challenged with. If you did well, they are filled with phrases like:

Now I need to stop right there and tell you that the same guy in 1974 was barely able to scrape by with a 3.0 average and needed constant reminders about his hair length.  Those outstanding leadership qualities that seemed to appear from nowhere years later were no where present in that young man who had just barely been able to make Third Class Petty Officer. There was little danger of that guy receiving a personal letter of commendation no less a metal box full of personal awards, commendation letters and higher levels of recognition for excellence.

What made the difference? While an internal ability to come to his senses may have played a small role, it was the leadership of people like TMC(SS) Gale Brown (later Chief Warrant Officer). MMCS Bill Phelps and TMCM Nick Dalebout also played key roles in the miracle turnaround. The leaders who saw something in this floundering young guy and gave him every opportunity were the direct reasons he was able to achieve goals and abilities that were later recognized.

You see, in life, we are all capable of more than we sometimes allow ourselves. I could have spent my life accepting that I was just average and probably would never have achieved the things that I was blessed to be able to do. But I also know a lot of people along the way who would not have been able to find themselves if those guys who mentored me had not taken the time to brush the dirt off of the potential I was able to develop.

My contribution was pretty simple really. Given the chance to reinvent myself by a group of “leaders” I was able to find the inner strength in later challenges to continue to move forward. I used their example to try and help a number of guys after that when it was my turn. I hope I did at least as well as the ones who helped me.

One challenge I would give you today if you are in a leadership role. Do you have somebody who is struggling in their current role? Have you given them the chance to reinvent themselves in a way that makes them dig deeper inside themselves to succeed? I believe the highest calling of leadership is not to lead people who need little leadership, it is to help develop those who are struggling the most. When you abandon someone who is losing their struggle, two people lose.

I think I’ll hang on to the box. When I stumble on my way through life and someone questions my integrity, its nice to see that at one point in my life, a bunch of people thought my professional ability, initiative, and loyal dedication to duty reflected great credit upon myself, the Submarine Force, and the United States Naval Service.

These days, I just want to be as good a person as my dogs think I am.

2 thoughts on “The Old Metal Box”