I was only able to serve on five subs and two of those were 688 class boats so my viewpoint may be a bit limited. But I am under the opinion that the designers did a pretty good job making a machine whose sole purpose was to hunt and kill the enemy. The reactor and machinery spaces took up quite a bit of room, the weapons systems and sonar equipment were neatly packaged and there was just enough Lebensraum for the crew to sleep, eat and shower (even if some of that did have to be managed in rotating shifts). Generally, they were comfortable boats compared to some of the older ones but they were still missing one important feature.

Despite helping to build the San Francisco and spending four years on board, I was never able to find the 1.5 mile PRT track. The George Washington and Halibut didn’t have one either but for some reason there didn’t seem to be any critical urge to prove you could actually run that far back in the early seventies. Maybe the realization that the boat was only three hundred or so feet long drove that point home enough to earlier generations. As long as you could race from the torpedo room to shaft alley in an EAB, that seemed to be quite good enough.

We just sort of watched what we ate mostly and I can only remember one time having a sailor get stuck in the hatch at the end of a patrol. To be fair, Big John was big boned before the patrol started and he did spend quite a bit of time mess cooking too. It always seemed such a waste to throw away the remains of the ice cream so he was merely doing his duty. But I personally think they should have let him put the .45 belt on after he got topside when we returned to Guam. It was funny seeing the “closed” indicator light come back on though and made for quite a discussion after we turned the boat over to the Goldies.

The San Francisco was a thoroughly modern boat with many highly developed technological devices on board. In addition there were large rooms full of cabinets filled with machines that computed speed, distance, and all manner of information. In retrospect, it is kind of interesting that the laptop I am typing on probably has a more efficient operating system but at the time, it was all pretty impressive. What was more impressive was the amount of training and skills that the crew possessed. No matter what the rate or rank, each person brought many months and years worth of training to the boat. Even Auxiliary men (A-gangers) generally received at least a years worth of training to operate and maintain the equipment required to support the submarines operations. 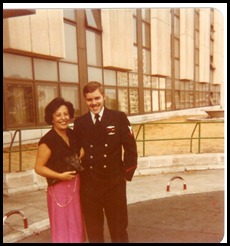 By the early eighties, physical readiness was beginning to creep into the framework of the Navy’s leadership. The enlisted men had shifted back from the fancy but hard to maintain suit jackets (which I believe hid much of the fat that bedeviled the leadership) and returned to the traditional cracker jack outfit. Frankly, the design is much less forgiving for someone who has spent too many hours hunched over a control console plotting a way to kill the enemy (who was assumedly doing the same thing to us). There seems to be a direct connection with how much time one sits and how bad one looks in formation with a polyester white uniform hugging their body.

Personally, I felt the PRT emphasis was also directed at me. First, it only became important as I started getting closer to the age of thirty. Second, it was directly related to my rank. I used to watch guys with absolutely no self control be advanced for many years before that time but suddenly as I became interested in getting more rank, it became a priority. Some of you who are older may have noticed but past the age of thirty, gaining weight becomes infinitely easier and losing weight becomes nearly impossible. Its as if the body realizes it is coming closer to the end and tries to preserve every ounce of fat to try and ward of the imminent end.

Complicating the matter is the type of food available. On a boat that stays under for months sometimes, the only way to keep morale up is to feed the crew well. If its fried, deep fried, or refried, its on the menu. Pizza night is a big must, sliders are a much looked forward to meal and the ever present deep fried shrimp that comes in large buckets to the hungry hordes each week. Whole milk, cheese by the brick, salted butter and gravy on everything round out the epicurean delights that pack on the pounds. To this day, I can still taste and smell the New York Strip Steaks so lovingly prepared on the grill by MS1 Silas with fried potatoes, onions and mushrooms swimming in a sea of butter.  Top that off with a sheet cake covered with butter cream chocolate frosting and you have the epic end of patrol meal that no living sailor can resist or refuse.

It’s ironic that all of the skills and knowledge I had been acquiring pushed me towards a more responsible position at the same time my body decided to start betraying me. The tape measure got smaller each cycle and the running seemed to take much more energy (and time). Frankly, a couple of the “jocks’ on board who helped the XO run the PRT probably snuck out at night and lengthened the course just to throw us off.

The most insulting part was that the course in Pearl Harbor was over by the Marine Barracks. I am sure some old Marine is sitting at a Legion Bar someplace regaling his bar mates about the time the “whales” showed up for their semi-annual run. It normally happened right after we had come back from a run so everybody was pasty white and of course, t-shirts and shorts can only cover so much cellulite. I am told that Hawaii experiences a large number of earthquakes each year that are only detectable by machines. I wonder if anyone ever tried to correlate a pattern between the small quakes and the return of a submarine crew to the “killing fields”.

I have a confession to make. I managed to stay one step ahead of the PRT police just long enough to get promoted from first class to Chief and then on to Chief Warrant Officer. It was tough and I swear, if I ever have to run again now that I am at my retired age, you may as well just go ahead and shoot me.

There was only one guy who I ever met who managed to beat the system. I am not sure if it was because we were in Scotland (where the only people who ran were the sheepherders) or if it was because he was in charge of the unit where we were stationed. Maybe it was because he was so huge and frankly pretty gruff that no one dared to actually tell him he may have been over the limit. Of course, the XO (who I still regard as a friend) did me the favor of assigning me as the command’s PRT coordinator. This did much to endear me to the old boy and I can remember a number of delightful conversations leading up to the PRT over lunch.

Consumption was never an issue for the Captain. He had a lot to maintain so it was understandable why extra portions would be required. On the day of the PRT, he brought me his measurements scribbled on a piece of paper. I had never known anyone with a thirty inch neck before but I assumed he would know what his own measurements are and duly recorded it in the log as directed.

The rest of the crew ran a wonderful 1.5 mile route in the beautiful highlands of Scotland. I actually learned to enjoy that run since the air was always cool and the scenery was brilliant. Although I never actually saw the captain run, he apparently did it quite well, always managing to beat his age appropriate time by a few seconds. Pretty miraculous I would say.

Personally, I think that was the origin of the term “Too Big To Fail”.

Fortunately, the tour came to an end quickly and before I had to monitor another PRT. My last tour was on the USS Hunley where I learned about the special exemption granted to Chief Engineers who smoked three packs of cigarettes a day. Apparently they were also not required to participate in the presence of others for our semi-annual fun run. I have to assume he also never located the 1.5 mile track on his previous commands. I ran with abandon during this tour if for no other reason I knew I would not see him anywhere near the field.

I retired with my dignity and have managed to climb up and down the scales a number of times since then. I am content with who I am now and manage to walk the equivalent of that 1.5 miles every day that I am able. I hope someone has corrected the design flaws in the most modern boats so that the boys (and now girls too I suppose) will be able to be better prepared.

The nation’s future probably depends on it! (at least that’s what I told myself at the halfway point of the run every time I did it).

2 thoughts on “Too Big To Fail”