My family has had a tradition of volunteering for the service for about four generations (five counting my nephews on active duty now). Great Grandfather was underage but somehow convinced the Union Army recruiter to allow him to serve. Rumor has it that he had been sent home once before because of his age. He was a firm Presbyterian and could not lie so he was unable to fake his age. But he also knew the question he would be asked and found a unique way around it. He took a piece of paper and wrote the number 18 on it and put it in his shoe. When the recruiter asked him if he was over 18, he could truthfully say he was. 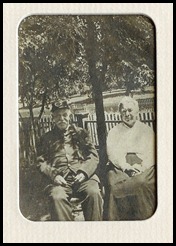 Grandfather Mac was in the US Navy during WW1 and my Dad signed up for WW2 at the age of 17 in order to make sure he did not miss the war. He almost never talked about his service (which is typical of men from the greatest generation). He would put his uniform on once a year and march during the Memorial Day parades and participated in the Legion and VFW. But the stories were few and far between. 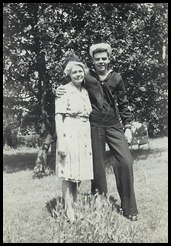 Dad had his Mother’s heart and suffered heart attacks and strokes early in his life. I was at sea the day he passed away and I was in a fog for the four days it took to come home. Considering the fact that they made me stand EOOW (Engineering Officer of the Watch) for those four days, I really probably just operated the engine rooms on remote control.

Dad’s funeral was as memorable as any I can think of. He was involved with so many things in his life and all of those people came to say goodbye. We gave him a proper Navy send off and his friends even made sure he had a flyover. 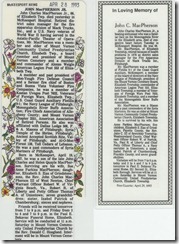 After the funeral, we stayed at Mom’s house for a few days and tried to help her start moving things around. I suppose that’s what people who are grieving must do. They pick up boxes and move things around in a search for what to do next. One of those boxes was a small box that had a packet of letters in it. I started going through the box and was surprised to find the story of his life that I never knew.

I asked Mom to let me have the box for a while (that was in 1993 which shows you I have no sense of the words “for a while”). Over the next ten years, I went through the box and started to get a sense of what he had gone through. There were pictures and maps, post cards and letters, Christmas Cards and some letters that had been returned unopened. The letters were all of the letters he had sent home to his Mother and Father during the time he was in the Navy.

I put the letters in order based on information I could determine on the faded envelopes and added enough content about the war in general to make a book which I gave to my family in his memory. We only made about fifty copies but each was passed out so the grandchildren could have some sense of who Grandpa Mac was during an earlier time in his life.

The letters form August of 1945 were from the Philippines where he was part of the group preparing for the invasion of Japan. Large stocks of material were being prestaged for the planned invasion that would bring an end to the war. Each man knew that the earlier invasions had been bloody and brutal plus the ferocity of the kamikaze attacks had been drilled into them since the day they entered boot camp.

Then came August 6th and the use of the first nuclear device on Hiroshima. There are no letters from him on the days following but after the second bombing and the subsequent declaration of surrender he penned a letter which was to be the biggest surprise of all for me in the many things I learned.

Well, by now you have heard the good news. Boy that’s pretty swell. Remember I used to say how I’d celebrate that great day when the war was over, (ha-ha) everybody kept on playing cards, everybody smiled but not much celebration of any went on here. I found a little booklet from Shoemaker so you would know something about that swell place. I’ll have some interesting things to talk about when I get home. We got a native talking last night and he told us the history of the island. I don’t know when I’ll get home or whether I’ll stay here or go someplace else. Nobody knows. I didn’t tell you but the salt water put a halt to my watch and the crystal came off. I was going to church this morning and thought I had lots of time but when I finally did find out it was too late. I wish you could send my radio. I’m gonna send half my stuff home when I get enough money to put stamps on the box. Well, be good. I’ll write later.

God be with you always and thank him very much for answering all of our prayers. 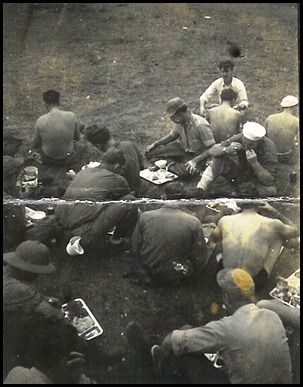 The simple words he used to describe the end of the worst war in the world’s history really stunned me. I expected that the men would have celebrated in a big way just like what you saw in Times Square in New York (minus the kissing thing since the nurses were at another base – another story for another time).

I guess despite all the romanticism about fighting the great war, the truth of the matter was, the people who made it all the way through just wanted to get home and get back to normal. Judging from the size of my generation, they seemed to do that pretty well too.

I thought about what the world would have been like had we ever been called upon to launch our weapons which dwarfed anything the world had ever seen. I am truly glad we never had to fulfill that part of our mission during the Cold War. I think about it every year at this time. The truth is, the bombs that were used probably saved my Dad and his fellow servicemen and women from facing the fury found on places like Iwo Jima and Okinawa.  Of course without him surviving, I would not be writing this at all.