I have been a member of the American Legion for 43 years. I can’t say that I planned on being a member when I first joined but my Dad was the Commander of Post 553 in Elizabeth at the time and he wanted us to do something together.

I had completed my first four years of active duty in the Navy and returned home in 1976 to allow the clock to run out on my reserve obligation. The Vietnam War had ended during my tour and the country was going through a lot of changes at the time. The post-Vietnam era was difficult since the anti-war movement was ramping down and the country was about to go into the Carter years. Without being political, let’s just say that between the shock of an energy crisis and some less than stellar leadership, the country was in what most people call “The Great Malaise”.

The Legion Post that I belonged to was already shrinking pretty rapidly. People of my generation were worn out by the war and the anti-military backlash and I think most just didn’t want to join or participate. Add to that the horrible economy and many people were just struggling to make ends meet. In the Mon Valley, steel mills and support industries were dying at a furious pace and the opportunities that we had all been promised as kids were going away faster than anyone could have imagined.

19 1979, the post (under my Dad’s very strong suggestion) elected me to be the Commander. I think the idea was to try and attract some younger guys (and maybe even girls). The one weakness of the Legion up to that point had been control. The World War 1 guys held on to the control pretty tightly and as they died, the WW2 guys and some Korean era vets took over. To be honest, it wasn’t always a welcoming place for the Vietnam Era people. Frankly, the way things ended kind of left a lot of people in a bad way.

The wake up call

All that changed with the Soviet invasion of Afghanistan and the disaster of the fall of the Shah of Iran. Coupled with the global rise of the Soviet Navy and Military in general and the people of the United States slowly woke up to realize that the dangers prophesied back in the 1950s were actually coming to life. There was a real growing feeling that America could be in its dying days and we were going to be a witness to the unthinkable.

The overwhelming rejection of Carter and embracing of Reagan was a breath of fresh air for the country. For my part I went back on active duty in the Navy, followed my star through three more ships and became a Chief Warrant Officer.

Back home, the Legion soldiered on. There was a growing feeling of pride in America again and it was reflected for a time in the Legion and other patriotic organizations. Parades and events started to see an uptick in attendance and membership started to stabilize.

My Dad used every opportunity to help the local post grow and stay relevant. Our riverfront service on the Monongahela was one of the longest continuous Memorial Day services in the Mon Valley. The day he died, the Legion and the VFW all showed up to pay their respects.

It wasn’t until this year (2019) that I have really begun to take stock of what the Legion has meant for America. To be honest, several key events in my own life and that of many others would not have been possible without the influence of the American Legion. My education was partially paid for while I was on active duty but like others I took advantage of the GI Bill to complete my studies. That degree has helped me maintain a pretty decent standard of living since retiring from the Navy.

The homes I have owned were also influenced by the Legion. The GI Bill also provided me with a unique opportunity to purchase a home that I might otherwise have not been eligible for. That blessing has been an advantage that helped me but also helped my community since I pay taxes and support the local communities that we have lived in.

I have a unique hobby. I like to do speeches for community groups and social organizations. I have done hundreds of them since retiring. This year, I added a new presentation in honor of the Legion’s Centennial. The audiences I have spoken to have all said the same thing: I didn’t know that about the Legion.

I can’t say that I blame them. Frankly, when I prepare for a talk, I do hundreds of hours of research in old books, periodicals and historical records in On Line reference centers like the Library of Congress. I found out so many things about the Legion that had been buried in time or obscured by other things. I vaguely knew about the relationship between the GI Bill and the Legion but as I dug deeper there was so much more to learn. 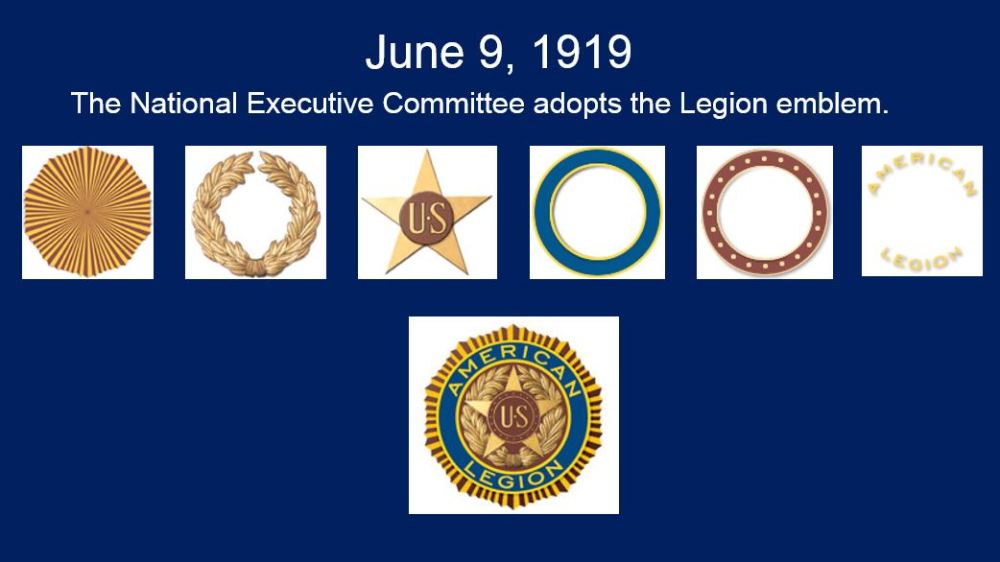 The presentation I do is about an hour long. It could be three if people had the patience to sit through it all. There were a lot of twists and turns for the Legion beginning with its founding in the aftermath of World War 1.

This organization has always been a fraternal organizations for men who shared a common experience. They had all served as members of the armed forces during what would become known as a global conflict. But why a new organization? The VFW already existed and so did the GAR (Grand Army of the Republic). Why didn’t they just become a new part of an existing group?

The simple answer was that they could not. Both the GAR and VFW limited their membership to men who fought under certain conditions during certain wars. There are newspaper articles that talk about maintaining their “sanctity” and exclusiveness. In fact, the head of the GAR even predicted that his organization would die when the last member died. That is exactly what happened when the last active member from the Civil War passed away.

The VFW represented men who fought in foreign wars. The men who were discussing the founding of the American Legion were distinctly aware that not everyone who was drafted or volunteered served in a combat zone. But the very nature of the war meant that the contributions of men and women from all areas needed to be reflected upon when considering the ultimate victory. This new group would include many who would have otherwise been excluded.

The founding meetings were instigated by the Officer Class. But the work and execution to launch the organization quickly spread to men of every class included privates and sailors and marines. This universal suffrage towards men and later towards women of every class made the American Legion truly unique and representative of the country they served. For the first time, a “Legion” could be led by people from every rank and not just a privileged few.

Word spread quickly and all across the country posts began to spring up. The men who had served came home to communities that were still responding to the after effects of such a great upheaval in society. The upheaval created a true determination on the parts of the returning warriors to influence their country. 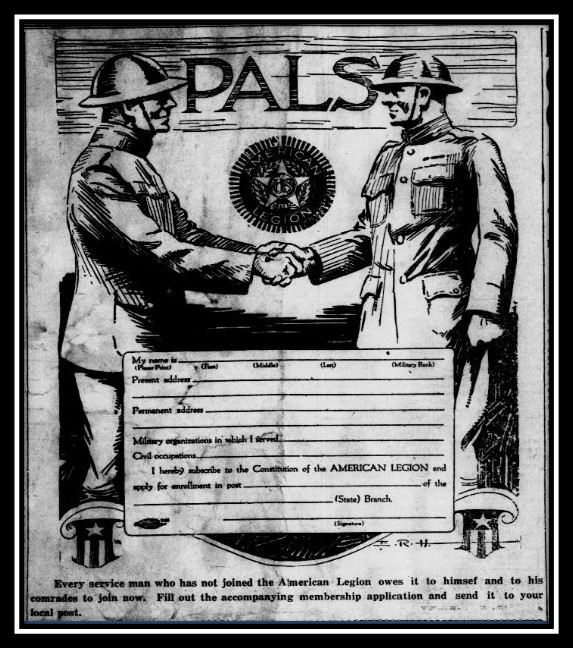 I will do another series of stories about how the Legion helped shaped the country in the years that followed their formation. Things that we take for granted now were not so set in stone back when they began. Not all of the people who lived in American were drafted for instance. Foreign born men who were not citizens but we living in America for instance were not included with the drafts that produced the large army and navy that went away. Many of these men were socialists and anarchists and created problems in their communities when the veterans returned. The anarchy even resulted in the deaths of some of the early founders of the Legion.

The emphasis on Americanism was not by accident or some blind sense of patriotism. Nearly all the early documents for the American Legion were a purposeful attempt to bind the country together under one defining set of principles that were strictly American. These men saw a real danger to the young country from foreign influence and did their best to codify a solution.

Today, America is once more facing the incursion of foreign influence and thoughts. We could learn a lot from the men who saw the evils of socialism and communism in the places they were sent to liberate. The signature document for the American Legion was its Preamble that is still repeated across the country in Legion meetings.

“For God and Country we associate ourselves together for the following purposes: To uphold and defend the Constitution of the United States of America; To maintain law and order; To foster and perpetuate a one hundred percent Americanism; To preserve the memories and incidents of our associations in the Great Wars; To inculcate a sense of individual obligation to the community, state and nation; To combat the autocracy of both the classes and the masses; To make right the master of might; To promote peace and good will on earth; To safeguard and transmit to posterity the principles of Justice, Freedom and Democracy; To consecrate and sanctify our comradeship by our devotion to mutual helpfulness.”

Maybe the country needs another wake up call.

I can’t help but think as I watch the news that we are about to be reminded about the cost of freedom.

One thought on “2019 – The American Legion Centennial”