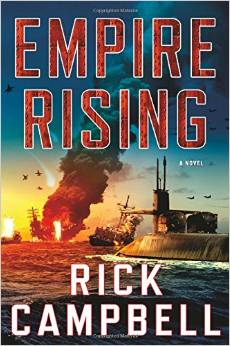 Years ago, I read my first Tom Clancy book, “Hunt for Red October”. I have always enjoyed reading and novels that held stories that could be plausible given the right circumstances have always intrigued me.

Being a former submariner, I have had to suspend my disbelief in many cases in order to enjoy the story. While I have not been on a boat for over twenty years, there are still some things that are possible and some things that would require a great leap of technological ability to pass the believability test.

What I loved about Tom Clancy was his ability to tell a story in such a way that I didn’t get too hung up on the technical details that might have made the story nothing more than an inert fantasy. Tom just had a way of making you want to believe that it could happen just the way the words in the book said they did.

Rick Campbell has captured that same ability. From the minute you begin the book to the minute you end, he creates pictures which include you as a close in observer. Whether it is on the deck of a submarine or in some remote corner of the Great Hall, you find yourself able to be swept up by the action and quickly gain an emotional investment in the characters. This book moves quickly and draws you in to every scene.

I will be honest in admitting that in the past I have often had difficulty reading a novel that blends technology, world events, and the action components without being skeptical. Empire Rising has broken through that skepticism. What impresses me is that his writing successfully blends the genres enough to allow me to believe it is real. I think this book in particular will appeal to many people who are actively following the growth of China (Spratly Islands, the unmistakable upward growth trend of the Chinese Navy plus the natural element of danger emanating from the two China’s).

Oh yeah… remember to breathe every once in a while when you do read it.

You’ll thank me for that reminder later.

One thought on “Now Read This – “Empire Rising” by Rick Campbell”