In the disastrous aftermath of Pearl Harbor December 1941, the United States and the remaining countries that were considered free faced enormous odds in their struggle against the Axis Powers. The war plans that had been poured over with such intensity for so many decades now laid in ruins as the ships and planes that were envisioned as key were no longer available. The entire emphasis had been placed on the use of capital ships like the USS Pennsylvania and USS Arizona surrounded by a number of support ships such as the fledgling aircraft carriers, fleet submarines, destroyers and cruisers.

Sailors for generations had come to regard these floating battle wagons as the kings of the seas. They had been designed to fight any vessel anywhere and were designed to take a pounding from the large guns of the potential enemy battleships. 16-inch guns were considered to be the best state of the art weapon to defeat a ship of any kind in a battle that would rage across the open sea during the day or at night.

In December of 1941, every single battleship in the Pacific owned by the Allies were rendered useless or sunk by an enemy who did not believe that the answers of the past applied to the problems of the future. A combination of treachery and new technology ended the illusion of power in a matter of weeks. The only significant surface vessels that remained for a long time to come were the cruisers that had been built to support the main fleet.

“Cruisers are lightly armored, carry moderate armament, and are of high speed, about 34 knots. All cruisers have an extremely large fuel capacity in order to maintain high speed for a long period. Cruisers, like battleships are divided into numerous watertight compartments”

The New Orleans class cruisers were a class of seven heavy cruisers built for the United States Navy (USN) in the 1930s. The ship class was a result of naval treaties between the major naval powers at the time which sought to limit the growth of large capital ships (particularly battleships). Originally called the Astoria-class cruiser, the class was renamed after Astoria was sunk and the surviving ships of the class underwent substantial reconstruction. 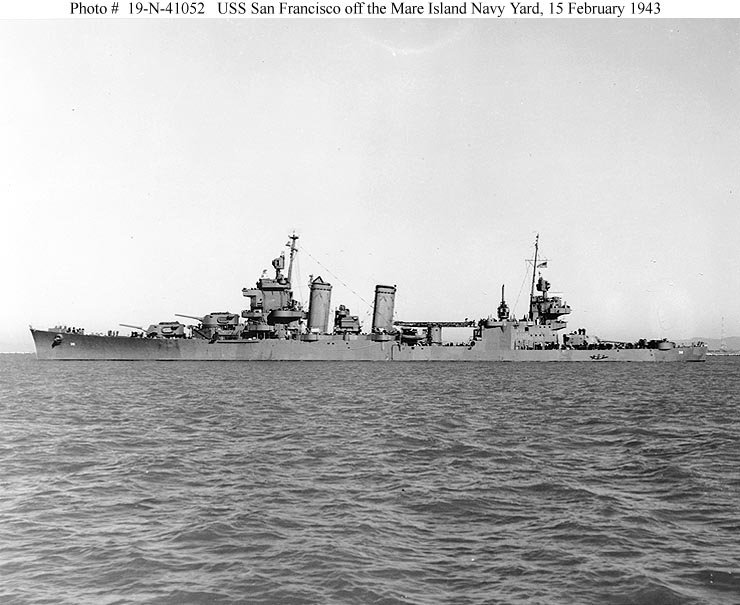 These ships participated in the heaviest surface battles of the Pacific War. Astoria, Quincy, and Vincennes were all sunk in the Battle of Savo Island, and three others were heavily damaged in subsequent battles in the Guadalcanal campaign. Only Tuscaloosa, the single ship of the class to spend most of World War II in the Atlantic, got through the war without being damaged. Collectively, ships of the class earned 64 battle stars.

The four surviving ships were laid up immediately after the end of the war, and sold for scrap in 1959.

“On 7 December 1941, San Francisco was in Pearl Harbor and was awaiting docking and the cleaning of her heavily fouled bottom. Her engineering plant was largely broken down for overhaul. Ammunition for her 5 in (130 mm) and 8 in (200 mm) guns had been placed in storage. Her 3 in (76 mm) guns had been removed to permit installation of four 1.1 in (28 mm) quadruple mounts. The 1.1 in (28 mm) mounts had not been installed. Her .50 in (12.7 mm) machine guns were being overhauled. Only small arms and two .30 in (7.6 mm) machine guns were available. Moreover, a number of San Francisco’s officers and men were absent.

At 0755, Japanese planes began bombing dives on Ford Island, and by 0800, the surprise attack on Pearl Harbor was well underway. The men in San Francisco secured the ship for watertightness and began looking for opportunities to fight back. Some crossed to New Orleans to help man antiaircraft batteries on that ship. Others began using available rifles and machine guns. Ammunition for .50 in (12.7 mm) machine guns was transferred to Tracy for use.

San Francisco was not bombed or damaged during the Japanese air raid. After the attack was over, work resumed to make San Francisco seaworthy and combat-ready.

On 14 December, the cruiser left the yard; the scaling of her keel had been postponed in favor of more necessary repairs on other ships. On 16 December, she sortied with Task Force 14 (TF 14) to relieve Wake Island. The force moved west with a Marine fighter squadron onboard Saratoga and a Marine battalion embarked in Tangier. However, when Wake Island fell to the Japanese on 23 December, TF 14 was diverted to Midway Atoll which it reinforced. On 29 December, the force returned to Pearl Harbor.” 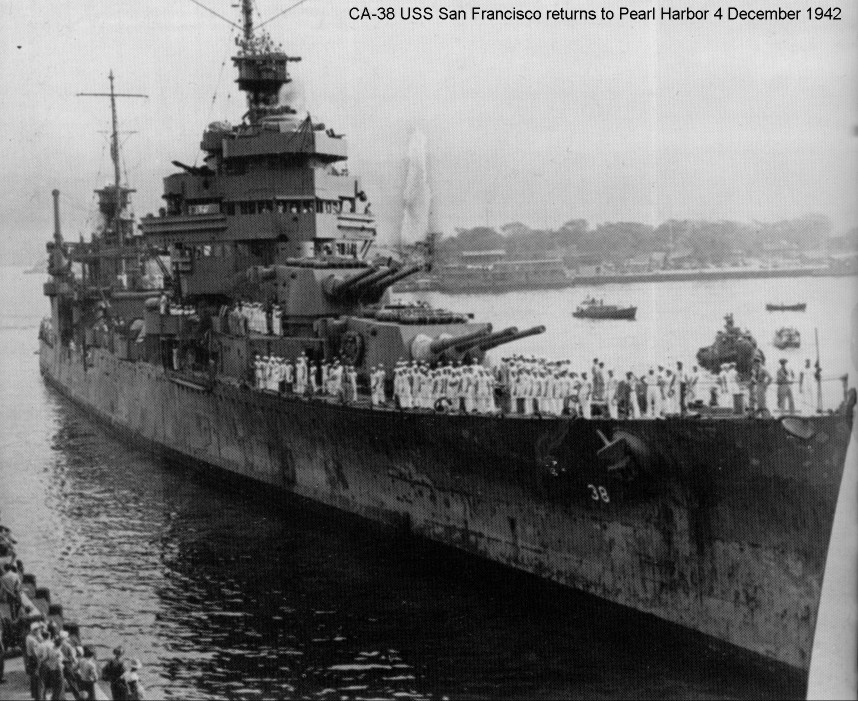 The Japanese would feel the effect of not completely destroying the San Francisco. She became the most decorated ship of the Pacific Theater earning 17 Battle Stars. Earning those stars would cost a terrible price though. On November 13 1942 during the horrific Naval Battle of Guadalcanal, 77 sailors, including Rear Admiral Daniel J. Callaghan and Captain Cassin Young, were killed. 105 were wounded. Of seven missing, three were subsequently rescued. The ship had taken 45 hits. Structural damage was extensive, but not fatal. No hits had been received below the waterline. Twenty-two fires had been started and extinguished. The designers who conceived of the class and all of her engineering features, combined with the amazing skills of the surviving crew, prevented a much greater loss of life. More significantly, they returned the CA 35 to its place in the battle line in enough time to help win the war.

The San Francisco was repaired in Mare Island and spent the entire year of 1943 supporting the various operations across the Pacific that were designed to wrest control back from the Japanese. After a very hard year fighting in every major battle in the Pacific, she returned to Pearl Harbor to rest. The Pearl Harbor of 1943 was very different than that of 1941. The defeat felt on December 7th was replaced by sheer determination. Most of the wrecks from that day had been refloated and returned to active duty. New planes now filled the skies and aerodromes all around the island. Troops of every kind filled every available inch of space preparing for the island campaigns to come.

For the battle weary sailors on the CA 38, Hawaii must have been a dream come true. Their sturdy ship had taken a pounding in the last year including a deadly strafing in November that resulted in one shipmate being killed and twenty two injured. But she sailed on for another battle, another day.

Bing Crosby’s latest hit was released that year and probably expressed the sentiments of many of the soldiers and sailors. “I’ll be home for Christmas” still has the power to evoke strong emotions from both the deployed service people and the folks back home. Across the oceans, General Dwight D. Eisenhower was declared the new supreme commander of all allied forces in the European Theater in preparation for the thrust into that captive continent to defeat the Nazis.

I can only imagine what the sailors and officers on the Frisco were thinking. They had been through some of the hardest fought battles yet but the future promised only more of the same. Hawaii at Christmas time is always a beautiful experience but I wonder if I could have relaxed knowing that I would soon set sail again to try and continue the path to Tokyo. The busses between Honolulu and the base were probably jammed with sailors and marines looking for anything to take their minds off the harsh life they had been living. Letters and packages from home probably caught up to the boys on the CA 38. Those precious memories would have to hold them for a long time to come as the San Francisco prepared to rejoin the battle line for the coming thrusts.

But the folks back home were continuing to rally. New ships and planes were pouring out of the yards and factories all across the United States. The Japanese had been turned back at Midway and never came close enough to the mainland again to significantly impact production. Average families got used to the war time routine of sacrifice and bond drives. Returning men who were in the fight helped to remind people we ewer all in it together.

In researching this story, I came across a menu from the USS Essex which was serving in the Pacific with the San Francisco. I will let the voices of the past end this story with their words of encouragement and a reminder that the work was not yet done.

I salute those men who had been through so much in the previous two years. The starry eyes of someone who had not been battle tested were replaced with the eyes of seasoned men who scoured the sky for enemy fighters and enemy subs. The hard work was yet to come but they came back to their ship and when the time came sailed with her on to victory.

Merry Christmas to all of them today wherever they are.