For fifty years, I have had a little scar on my forehead that is a reminder of an incident that happened in the woods near my home. I’ve talked before about how much fun it was venturing into the woods with my friends and fellow siblings but that scar is a gentle reminder that not all things in those days were carefree.

It was a pretty typical summer day with all of the kids out of their houses. Rumor had it that one of the neighbors had hung a tire swing up at the end of Duncan Station Road where the builders had just stopped the growth of our neighborhood and street. The lot where the tire was hung was an absolutely perfect place for a tire swing. Old growth trees, a really steep hill that allowed the swing to go far out over the gulley, and enough cleared land around it to make it a natural playground.

I can’t remember who was there that day but I do remember it was a mix of boys and girls. That wasn’t completely unusual for our neighborhood but as we got older that would happen less and less. I think all of the MacPherson kids were there (except maybe Tommy who was just a toddler. The sun was pretty bright and there had been no rain for a while so it was generally a great day to be outside playing.

Once we got to the swing area, taking turns became the order of the day. The swing rope was hung pretty high in the tree and the tire was a good size as well. The way it worked was that you pulled it up the hill as far as you could, you jumped in the center and down you went gathering speed as you flew through the air. In the eyes of a kid, it probably was going a hundred miles an hour and went so high you would have gotten a ticket from the FAA.

The afternoon wore on and a new game developed. Since only one person could go at a time, the new trick was to wait until the rider was plummeting at breakneck speed through the air and run just in line with their path. The object of course was not to get hit by the rider. I am not sure everyone appreciate the new game but we were determined to show our bravery.

At one point my sister Liz got on the tire and came down the hill. Despite the fact that I was probably tired, I started running towards her path. Two things happened really quickly. First, I tripped which slowed me down. Second, her forward momentum caused her to hit me hard enough that I went flying (without the relative comfort of the tire swing around me). I landed forehead first into a very large concrete manhole bunker that had been placed in anticipation of continued growth of the neighborhood.

I don’t remember much about the next hour or so. Lots of blood, tons of screaming, the ride to the hospital in my Dad’s car.

Last night, I was reminded of something else that happened that day which was a distant memory. I didn’t know much about race since we lived in a small suburban community. But the hospital where Dad drove me was in McKeesport PA and the Doctor who treated me and sewed up my wound was a Negro. I know he was a Negro because my Dad made sure to tell me when we got home. Frankly, it didn’t much matter to me at the time. I had a large bandage and stitches all across my forehead that would never heal (so I thought).

Last night, we watched an older movie that starred Cuba Gooding JR about some doctor who grew up in Detroit in a poor home with little to no resources. The kid overcame so many things on his way through childhood and finally became a top Neurosurgeon.  You probably know him as Dr. Ben Carson. The movie was made a few years ago so it doesn’t cover the trials Dr. Carson is now going through for his political and conservative views. In the movie, the stress was just on the journey he made and the powerful outcome.

I don’t know the name of the Doctor who treated me. I have no idea what struggles he had to go through to graduate from Medical school. I am not even sure what Dad felt it necessary to tell me that he was a Negro. (remember it was 1963). I do know that my Dad helped all of us to understand what unfair looked like. During the riots after Dr. King was killed, we did some mission work in a black congregation in McKeesport.

I look at the little scar every once in a while when I am shaving. Its not very big anymore and I have to kind of wrinkle my forehead to really see it. But I know that a man I didn’t know saved my life that day and all of the sum total of his experiences did not prevent him from giving me the best care he could. I honestly wish I knew who he was so I could thank him.

1963 was a horrendous year. Kennedy being killed, the tragedy in South East Asia beginning to play itself into being, a death of a close family member  In the next few days, many of us will remember the tragic loss of the USS Thresher and all of the men who were on board. We prayed for them in Church today. It seems like such a small and insignificant thing to do for shipmates who suffered such a painful tragedy. But I’d still like to think it matters. 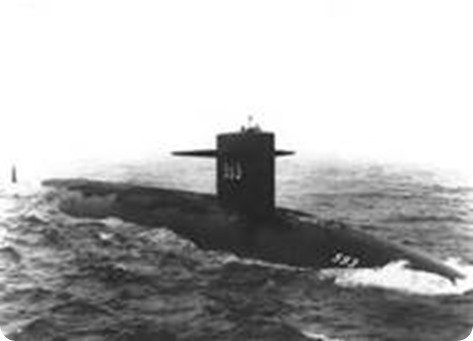