HMCS Sackville is the last remaining Canadian-built Corvette. She is the oldest Canadian warship and its official Navy Memorial since 1985. She represents some of the greatest sacrifices of the war for the Canadian forces. In all 4,600 sailors, merchant seamen, RCAF and Canadian Army personnel gave their lives in the North Atlantic. Canada lost 24 warships, 70 merchant ships and 350 aircraft during the battle while carrying over 181 million tons of supplies to Britain. 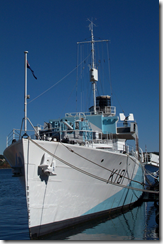 The Battle of the Atlantic was the longest of the Second World War. It was the combined Naval and air war to try and stem the flow of the German U-boat offensive. The convoys that were the lifeline for England and Russia, were increasingly hunted by Admiral Doenitz’s U-boat packs. These supplies were crucial in keeping the invasion supplies running that would eventually break the Atlantic wall. But by 1941, the U-boats were sinking allied shipping faster than it could be built. Starvation of materials and food were once again threatening the Allies. 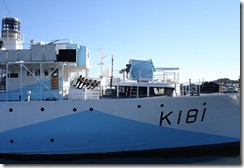 The Canadians eventually built 123 Corvettes like the Sackville to help and counter the threat. The corvettes were an efficient ship that were very well suited to their purpose. With little luxury and even less comfort, they plied some of the least forgiving parts of the North Atlantic along with their sister ships for the balance of the war.

“Flower Class corvettes were originally intended for coastal escort and mine clearing work. Derived from a whaler design, they were simple, highly seaworthy vessels that could be constructed in secondary yards. The dire lack of ocean escorts early in the war necessitated their being used to screen convoys traversing the North Atlantic between Nova Scotia and the UK. This was a role for which they were ill-designed, and their crews suffered accordingly. The Flowers were wet, highly cramped and impossibly lively. Many sailors could not adjust to the exhausting routine. Compounding the misery was the inexperience of the crews, most of whom had never been to sea. But any escort was better than none at all, so the yards continued to turn out Corvettes. 120 were built in Canadian yards, and slightly more in the UK. The US, Free French and Norwegians also used Flower Class corvettes, but the overwhelming majority saw service with the Royal and Canadian navies.”

“The corvettes spent monotonous months plodding back and forth across the trackless waste of grey seas that were never at rest. To the men who sailed in these ships came a great weariness from the relentless watches, the untempting food, and the constant, chafing motion."
– Lieutenant William Pugsley, excerpts from Saints, Devils and Ordinary Seamen 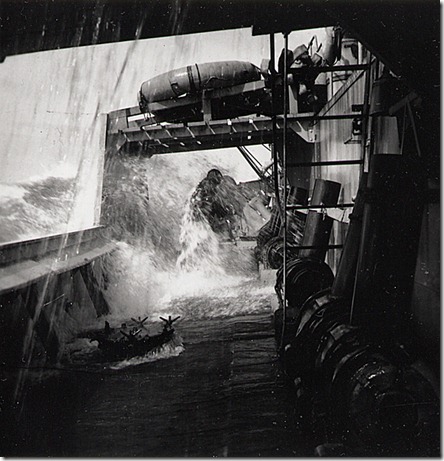 The bridges on the tiny ships were open which was in keeping with Royal Navy traditions. Men had to be in immediate contact with the sea in order to be a proper sailor. The size of the ships and their construction made for plenty of proper sailors

The little ships did their duty and helped to bring the Battle for the Atlantic to a closure. If anyone deserved to celebrate the end of such a long conflict, it would be those who had ensured freedom by their countless hours of escort duty in such a hostile environment.

For any travellers who have ever been to this picturesque town and her cross channel sister Dartmouth, you are immediately drawn into its natural beauty and grace. It’s a tidy town with museums to remember the many wars fought by ships sailing from her harbors. Some of the tragedies would have killed a less hardy town, but Halifax grew from the ashes of each one.

Halifax was also ground Zero for the last Battle for the North Atlantic. While some say the battle could have been avoided, more informed people would remark that after xix years of pent up hostility, there was absolutely no other outcome than the one that occurred..

Halifax had always been an important North American port but the wartime influence had swelled her from a backwater community of less than 70,000 to a hustling city of 130,000. Like most war time communities around a defense function, overcrowding and limits on resources led to many frustrations between the locals and the outsiders who had come to serve in their war time roles. Since most of the convoys to England started here, that overcrowding was made even more repressive as the ships in the convoys would stay at anchor for days and weeks until their appointed departure dates.

The residents weren’t any worse than the citizens of seaports like New Orleans and Philadelphia but supply and demand often dictated unnatural rise in process and difficulty in obtaining services. Geographically, Halifax and Dartmouth are off the beaten track of the rest of Nova Scotia and Canada itself. The early settlers hugged the coast and made their livings supporting the sea going and fishing traditions. So the entire area became a boiling pot of anger and frustrations as the war kept on for so long.

Prelude to the Battle

It was commonly felt by both the Navy and the Civilian authorities that the war was coming to a close. The Admiral in Charge ADM Leonard Murray felt that his boys had one the peace and deserved their chance to celebrate. He had ridden the little Corvettes and knew the suffering and deprivations that his crews had gone through to help free Europe. In the words of the investigators, he didn’t like and had little consideration for the local administrators.

The local liquor administration board had decided to close their outlets on the afternoon of the victory (May 7th) and almost every single bar, restaurant, movie house, and retailer shuttered their places of business supposedly to prevent trouble. Even the local house of ill repute put the closed sign up for the day. Without knowing this ahead of time, Admiral Murray discharged over 9000 of his men for the night with only one warning:

“be joyful without being distasteful or disrespectful.”

By midnight, the little town had over 12,000 celebrants downtown with no place to eat, drink, watch a movie or relax. It wasn’t long before some alcohol was “liberated” and the ensuing violence resulted in police vehicles being burned, tramcars being set on their sides, liquor stores being pillaged, and windows smashed.

On Barrington Street, there was so much broken glass, it came over the top of the curb. One reporter who braved the night later said that it reminded him of scenes he had seen in London during the Blitz. By morning, the scene was also littered with drunken sailors and civilians and the remnants of the night before. Retail stores had been looted too and clothes that had been overpriced for so long ended up in burning piles on the street corners. It was not just the sailors who had a pent up frustration, civilians with limited means came out in force too.

It could have ended there but the Admiral refused to believe that his sailors were the root cause of the action. By noon, he made the fateful decision to release another nine thousand from their ships and stations. Halifax never knew what hit it. By that evening, both he and the Town mayor were driving through town on a truck with loudspeakers ordering everyone back to their homes and the bases. Only the arrival od a steady rain at midnight on the second day finally put the days activities to rest.

The results of the last battle? Three people died (two of alcohol poisoning and one a possible murder that was never solved). More than 570 businesses were damaged, some never to open their doors again. Over 200 shops were looted – liquor stores were nearly emptied by 4 PM the second day.

Most notably, sixty five thousand quarts of liquor, 8,000 cases of beer and 1500 cases of wine were liberated from liquor commission shelves. The price tag for the party: over 5 million dollars including the cost of replacing all of that broken glass.

An enquiry placed the blame on the Admiral and he became the highest ranking casualty of the action. Local towns people had mixed views as reflected in one of the Letters to the Editor not long after the last battle.

“I personally think the downtown merchants got exactly what they deserved and it’s too bad that others who deserved it were missed.”

As late as 2005, Halifax still was reluctant to fully recognize the role it played in the war, partially because of the memory of the last battle.  In 2008, the HMCS Sackville was the centerpiece of a special observation for the end of the war in Europe. To the best of my knowledge, there were no riots.

Thanks to the brave men and women who made so many sacrifices. The freedom we all enjoy today was ensured by people of many nations. None were as impressive as those who sailed their magnificent ships into the face of the tumult. If it would have been me, I would have given you the booze and saved the cost of the broken windows for a bigger party. 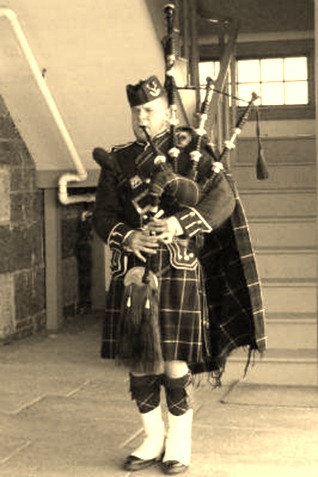 Every night at the Citadel above the city of Halifax, a lone uniformed piper plays tattoo. Rumor has it that his real purpose is to honor the sacrifices of so much single malt on a single day for such a grand purpose.

But, I am sure its just a rumor.

One thought on “The Last Battle”