Ah, Guam, garden spot of the Pacific. “America’s Day Begins in Guam” said the license plates of this little island paradise for many years. Guam (Guahan)  is an organized territory of the United States and has played a key role throughout its long history with the US. It was also a launching point for countless FBM patrols during the Cold War and still serves as a forward sentinel today.

Guam was discovered by Ferdinand Magellan and was a colony of Spain until the Spanish American War when it was surrendered to the United States. It was captured by the Japanese the day after Pearl Harbor and remained in their hands until 1944. There are many stories of the courage of the Guamanian people under the harsh hands of the Japanese invaders. July 21 is commemorated each year as Liberation Day. The last Japanese soldier actually surrendered in January 1972. One can only imagine the shock he must have felt at the sight of the hundreds of B52 jet missions taking off from Anderson.

Guam’s location made it an important part of America’s strategy during the Viet Nam and Cold Wars. Despite being in the path of Typhoon Alley, Guam was an ideal location for air and naval bases which is one of the reasons the US wanted it back from the Japanese.

As any tender or boat sailor who has ever been there can attest, there are only two seasons in Guam: Wet and wetter with an annual rainfall average that comes close to topping 100 inches. The coolest months are generally January and February and the humidity is probably the lowest then.

The military bases comprise nearly 30% of the island’s total land area. This makes it a key hub for all of the US military in the western Pacific. Despite the size of the armed forces and their dependents, there is actually no danger of the island tipping over.

How this Admiral kept a straight face during this questioning period is beyond me.

My first visit to Guam was on my way to meet the USS George Washington for my first patrol. We landed in a contracted jet plane at Anderson Air Force Base and busses took us to Polaris Point to wait on the USS Proteus for the ship to return. The stay on the “Old Pro” was rather interesting since I had never been on a naval ship before. The berthing area was cramped and it was kind of confusing figuring out where to go on the ship to eat.

The USS Proteus (AS 19) was typical of all the early Polaris program support ships. She had been built for WW2, was decommissioned in 1947, and recommissioned in 1960 and modified to handle the Polaris missiles which would be part of the FBM program. For an old ship, she made the rounds. Holy Loch Scotland, Rota Spain, Charleston SC, and of course several long tours in Guam. 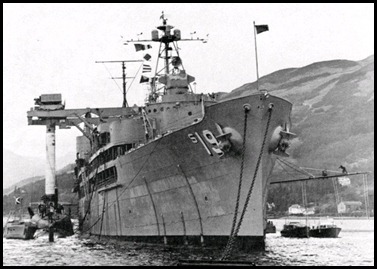 When I first saw her in Guam, she had just completed an overhaul in Mare Island and a short stop in Hawaii to repair a boiler explosion. She completed a shakedown cruise and relived the USS Hunley in January 1973. She stayed for her final FBM tour until 1978. It is rumored that she was kept afloat all those years by sitting on the standard issue navy ceramic coffee cups that the boomer boys would throw over the side, but I am sure that was just a rumor. 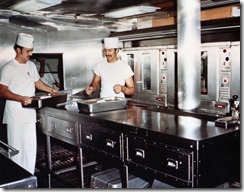 It wasn’t long before we discovered Andy’s Hut. This was a small outpost of entertainment on the harbor with a few types of entertainment and of course some cold beer. If I remember right, the two choices we mostly had at that time were Olympia and Budweiser and both tasted like they were chock full of vitamin formaldehyde.  But we were young and it was Guam. Andy’s Chateau By The Sea was also home to a number of small USO shows that were brought in to keep the sailors and Marines from remembering that they were on Guam.

The boys on the tender worked hard to keep the boats in shape. I think an entire book could be written about the memories of Polaris Point, but that’s for another day. I sincerely thank each and every one who worked so hard to keep us in good shape.

My favorite memory of Guam actually came in 1982 when I was on the USS San Francisco. We were in the middle of a West Pac and the wives were permitted to come to Guam and visit us during a pier side overhaul. My wife of a few years made the long plane flight from Honolulu and we were both looking forward to a great reunion together. As the plane circled the island, the pilot told them to buckle in for their approach to Guam. The wives looked out their windows and all said the same thing: “Where is it?” As the plane went lower and lower with no landing field in sight, there was a moments pause for all of the passengers. At the last minute, the plane dropped down on the coral packed runway and finally came to a stop in front of the small terminal.

I was waiting with the other husbands when the wives emerged from the plane and came down the ramp. The most beautiful blue eyed blonde I can ever remember seeing came up to me and said “Hi sailor, waiting for me?”. I held her tight and after a really long kiss she looked at me and said “When I married you I told you I would follow you to the ends of the earth. Well, I am here”.

We had a great visit together and we will always have wonderful memories of that time together. The truth is that many people who have been there over the years have come to appreciate the natural beauty and splendor of this little Paradise in the Pacific.

From a practical standpoint, Guam has once again emerged as an important part of our countries future. She is a forward base for air and naval forces once again and will stand at the crossroads of history for years to come. Just as I once prayed that we would never have to perform the mission of the boomers who sailed from there, I pray that we will never have to use her in future conflicts. Unfortunately mankind does not have a very good track record.