The boat had just returned from her last mission and was about to undergo decommissioning. My previous assignment had been at Pearl Harbor on the USS George Washington but I did not want to extend to take the boat into the shipyard at Mare Island. The Navy transferred me at that point. To Mare Island. Go figure.

I lived on the island in the barracks assigned to the crew of the 587. They weren’t too bad but you could tell that things were already slowing down at the shipyard. The special projects boats operated out of there and of course other nuclear boats were still coming for overhauls. But new construction was a thing of the past. The glory days were definitely behind the yard.

1970 USS Drum – submarine (nuclear powered) which coincidentally was the very last nuclear submarine built in California. In 1972, the Navy officially ceased building new nuclear submarines at Mare Island, though overhaul of existing vessels continued. We decommissioned the Halibut in 1976. Nautilus was decommissioned at Mare Island in 1980, then rigged for towing back to Groton, Connecticut to serve as a museum of naval history.

The Yard was decommissioned on April 1, 1996. Ninety six years after the submarine entered service in the American Navy. It’s very sad to see the state of things today. Mare Island had been an integral part of the Navy for many years until it fell victim to the various peace initiatives.

But the country owes the place a debt of gratitude for producing the many ships and submarines built and repaired throughout her entire life.

Next year, I will be doing a series on the shipyards that helped serve the country during the Cold War.

One of those submarines was the USS Woodrow Wilson (SSBN-624)

The contract to build Woodrow Wilson was awarded to Mare Island Naval Shipyard at Vallejo, California, on 9 February 1961 and her keel was laid down there on 13 September 1961. She was launched on 22 February 1963 sponsored by Miss Eleanor Axson Sayre (Wilson’s granddaughter), and commissioned on 27 December 1963, with Commander Cleo N. Mitchell in command of the Blue Crew and Commander Walter N. Dietzen in command of the Gold Crew.

This was the eighth nuclear submarine launched at Mare Island and the 502nd overall vessel launched when she was put in the water. 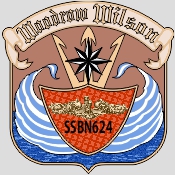 NAMED FOR Thomas Woodrow Wilson (1856—1924), scholar and statesman, a student of political science who, as 28th President of the United States, was able to put into practice his own academic formulations of good government. More than any other man who has held the ofﬁce (with the possible exception of Jefferson) Wilson had a coherent philosophy of the Presidency; in his view it should be a partnership between the occupant of the White House and the great mass of the people, whose conﬁdence and support would make the President the most powerful political force in the Government. It may have been Wilson’s greatest achievement that he was able to emerge from the academic world to become the hero of the common man. With the people behind him, Wilson achieved an extraordinary record of domestic reform; when he lost their support at the end of his Presidency, his career ended in failure.

He was one of those rare men who pursue two professions and reach the top in both. As a scholar and educator, Wilson became the leading political scientist of his day and the president of Princeton University; in government, he rode the wave of moral indignation to the governorship of New Jersey before serving two terms as President of the United States. And yet, although he was a spellbinding orator, Wilson’s personality was more suited to the scholar than to the politician. An introvert—aloof, quiet, he was more at home immersed in thought than addressing the multitudes. “It is not men that interest or disturb me primarily,” he said. “It is ideas. Ideas live; men die.”

He believed in the persuasive force of logic. This, combined with his devotion to principle (his critics called it “stubborn)

In April 1917, the United States joined the Allied and Associated Powers in the war against the Central Powers. Exercising his powers as Commander in Chief, Wilson was well aware of the Navy’s role in the “war to end wars” and “to make the world safe for democracy.” In a speech to the officers of the Atlantic Fleet on 11 August 1917, the President said: “… the officers of this Navy . . . have the distinction of saying how this war is going to be won.” With the Navy guarding the sea lanes to Europe, the United States eventually sent substantial numbers of troops “over there,” to join the battle on the Western Front. On 11 November 1918, the armistice was signed, ending World War I. Between 1914 and 1917, Wilson had based his appeals for peace upon the formula, “peace without victory.”

After the United States entered the conflict, the President continued to strive for the ideal of a peace wherein there would be no victor—none vanquished. Instead, he urged the recognition of the rights of smaller nations and freedom of the seas. His “Fourteen Points” attempted to apply these broad ideals to specific problem areas of the peaceful postwar settlement. Incorporating these fourteen points of international ethics into a comprehensive plan, Wilson broke precedent by leading the American delegation to the Peace Conference at Paris. Once there, however, he found to his dismay that European leaders were not as ready as he to make high ideals the foundation of a postwar settlement that would be fair and just for all.

As a result, negotiations were weakened by many compromises with Wilson’s ideals, and the treaty, with its provision for a League of Nations, was rejected by the Republican-controlled Senate. Taking his fight to the people, Wilson embarked upon a strenuous speaking tour, valiantly fighting to convince the American people that only collective security could keep the United States out of future wars.

In September 1919, worn out by the struggle for his League of Nations, Wilson broke, physically, and remained ill throughout the remainder of his second term. Never fully recovered, he lived quietly in Washington after Warren G. Harding won the 1920 elections and brought “normalcy” to the United States; Wilson died in Washington on 3 February 1924.

The men of the Wilson added their service to that of all the 41 for Freedom boat crews. She sailed for over 30 years and added to the story of the Polaris Triumph over Communism.

6 thoughts on “USS Woodrow Wilson (SSBN-624) “The world must be made safe for democracy.””