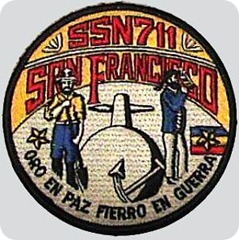 Seven years ago, an event happened on the USS San Francisco that serves as a reminder that even in this day of modern technology and science, the ocean is still mightier in its capability to test man’s limitations. On January 8th 2005 at 0243 GMY, she collided with a sea mount resulting in massive damage to the bow section, 23 were wounded as a result of the collision and the tragic death of MM2/SS Joseph Allen Ashley of Akron Ohio occured the next day as a result of his wounds.

Within a very short time of the collision, the emails of previous San Francisco lit up with passed along messages. Speculation was the name of the game which seems to ghoulishly follow all tragedies at sea. The first thought was an underwater collision with another boat but a closer examination revealed that the damage to the sonar dome and the forward ballast tanks was consistent with a much bigger collision: a seamount that was not on the charts available to the San Francisco.

I spent four years on the San Francisco and as a new construction team member, I crawled through every tank and ever void on the boat. As a plank owner, I remember the thrills (and scares) of putting the boat through her paces for Admiral Rickover. I will never forget the added pressure that he instilled in the crew as we did the irregular maneuvers to prove the boat’s sea-worthiness. But we hit every mark and sailed her to Hawaii for her first serious set of tours.

When I heard about the crash, my mind went back to the days of sailing at a high speed transit from one place or another. You can feel the rush of the water down the sides of the hull, every turn results in a feeling of pulling in one direction or another as the boat reacts, and the feel of the boat reacting to the churn of the prop is very noticeable. Crawling into your rack, you push the obvious into the back of your head (if you think of it at all). What if something gets in the way? I am not a great physics scholar but I believe that in my life I have been a great believer in the big physics laws. An object in motion… an object at rest…

For all the patrols and special operations I made on various boats, I consider myself to be incredibly lucky. A few typhoons and one hurricane gave us some real scares (stories for another time), but generally, we made the runs with very few issues. I had confidence on the builders of the boat (having watched them and sometimes helping them). I had great confidence in our Officers and Nav guys. Some of them were a little quirky but then they probably thought the same about A-gangers too. But we always operated the boat with the confidence that comes from being as ready as possible.

Having said that, I can only imagine the terror of lying in your rack and suddenly, with no warning, feeling the boat come hard upon a large sea mount. You can’t see anything, all you can hear is the noise from the collision, feel the uncontrolled stopping motion and the out of control nature of such a hit. I apologize to the crew members that were on board that day because my description only comes from a mixture of memories of operating the boat and an imagination that can’t correctly describe what you felt.

I will not post the gruesome pictures that are plastered all over the internet. As I said, having built the boat, I can feel myself hand over handing the ballast tank and thinking that it was incredibly strong. I know we had to do some hull cuts at one point and I can remember clearly what it took for us to cut through the skin of the shark. I can also remember the fact that the precious air need to conduct an emergency blow is partially contained in those same ballast tanks. I have ridden the boat a number of times from the depths on the cushion of that air and remembered how thankful to know that it was there.

All of us had heard stories about the Thresher and her death ride. The thought of losing that air for any reason was one of my greatest nightmares. Every time I did a rig for sea, this was one of my most stringent tasks. No errors allowed and hand check everything that could be hand checked. If I close my eyes, I can still see the gages on the BCP hoping that 4500 PSI would be enough.

The fact that the crew was able to hold it together long enough to get her back to the surface and then back to port is the greatest example of submarine training I can possibly think of. I remain proud of all submariners for their day to day bravery. This crew demonstrated that what may have seem improbable was indeed possible. It would be an honor and a privilege to serve with any of you guys on any boat anytime.

God Bless the Crew of the USS San Francisco