Over 106 years ago, a group known as the Wobblies (IWW) was born in June of 1905 to organize all of the workers of the world into One Big Union

The following is the preamble to the constitution for the International Workers of the World:

Between these two classes a struggle must go on until the workers of the world organize as a class, take possession of the means of production, abolish the wage system, and live in harmony with the Earth. 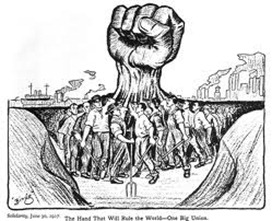 We find that the centering of the management of industries into fewer and fewer hands makes the trade unions unable to cope with the ever growing power of the employing class. The trade unions foster a state of affairs which allows one set of workers to be pitted against another set of workers in the same industry, thereby helping defeat one another in wage wars. Moreover, the trade unions aid the employing class to mislead the workers into the belief that the working class have interests in common with their employers.

These conditions can be changed and the interest of the working class upheld only by an organization formed in such a way that all its members in any one industry, or in all industries if necessary, cease work whenever a strike or lockout is on in any department thereof, thus making an injury to one an injury to all.

Instead of the conservative motto, “A fair day’s wage for a fair day’s work,” we must inscribe on our banner the revolutionary watchword, “Abolition of the wage system.”

The army of production must be organized, not only for everyday struggle with capitalists, but also to carry on production when capitalism shall have been overthrown. By organizing industrially we are forming the structure of the new society within the shell of the old.”

What will be the form of the Worker’s State? “

“Nobody who employs labor for profit can vote.”

Like many people, I have been watching the antics of the Occupy whatever people. Many of the old hippies have reappeared in their new garb but the message remains essentially the same. Class Warfare. Without that weapon, most normal people would probably avoid the procession of moon bats, drum beaters, freeloaders, and agitators. What has been disturbing to me is how many agitators are showing up on social media web sites that cater to Veterans and drive a divisive spike into the heart of their main missions.

I would find it hard to cheer on the Occupy somebody else’s property group in any case. But seeing them drag the flag, talk about destroying other people’s property, and overthrowing the government to be replaced by some kind of “democracy” more appropriate for the masses just kind of makes me madder than hell. The people who want these things claim to be true Americans yet they fail to remember the basic principles that made America great.

The history of the IWW is closely tied to many of the current agitators of today. The community organizers have always had a plan to redistribute the wealth of America more fairly. The people in the Occupy movement are being led by people who are working quietly to help to fulfill the promises of the founders of the IWW. Make no mistake, despite the scrubbed version of who the IWW was a hundred years ago, they were flush with anarchists, anti-Americans, and anti government agitators who would have loved to have seen the same type of revolution as the one that destroyed Russia.

Do not be lured by the simple messages that come from the puppets who occupy other people’s property. The only end game for the agitators is the destructive actions that will fundamentally  change America. Frankly, I have travelled and lived in many other countries over the past forty years. Even with all of its flaws, there is still no Republic on the face of this planet that even comes close in regards to freedom, opportunity, responsibility and a brilliant future if we let it continue to grow.

Power in a civilization will always exist. The real question for ever American is:

Where should that power truly reside? 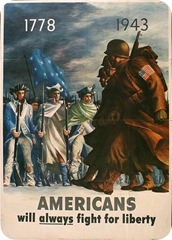